The MP-448 pistol (MP stands for Mechanical Plant’) was developed by young IMZ design engineer D.A. Bogdanov under the supervision of R.G. Shigapov in the early XXI century. The objective was to develop a modern compact pistol, combining high reliability, a Sow weight, and high maintainability. The project was based on the cartridge and the basic design of the Makarov PM pistol, boasting unrivalled reliability.

The MP-448 is a blowback-operated weapon. The pistol has a molded thermoplastic frame, reinforced by steel inserts that also serve as guide-rails for the slide. The recoil spring is wound around the barrel. The grip angle has slightly been increased as compared to that of the PM. The trigger guard is shaped so as to allow two-handed firing — the protruding front of the trigger guard, designed for a comfortable two-handed grip, is quite typical of modern pistols. The trigger guard is a fixed component of the integral plastic frame, thus there is a separate slide latch with a lever mounted on the frame.

The trigger and firing mechanism comprises a half-hidden hammer and can operate in the single-action or the double-action modes. A manual safety lever locks the firing pin, the hammer, the sear, and the slide. If the safety is applied when the hammer is cocked, the hammer safely decocks to the half-cock.

The pistol is fed from a detachable double-column box-type magazine, which shuffles cartridges into a single column in its upper portion. The magazine floor plate is fitted with a plastic cover that makes reloading easier. The ambidextrous magazine release button can be mounted on either side behind the trigger guard. The MP-448 features dimensions similar to those of the PM and the PMM pistols.

The MP-448 Skif-M (Skif-Mini) compact model chambered for the 9×17 short (.380 ACP) cartridge, offers reduced dimensions. Such pistols are frequently called ‘second-chance weapons’ or ‘backup side arm’ (if the main weapon fails) and are designed for comfortable concealed carry. 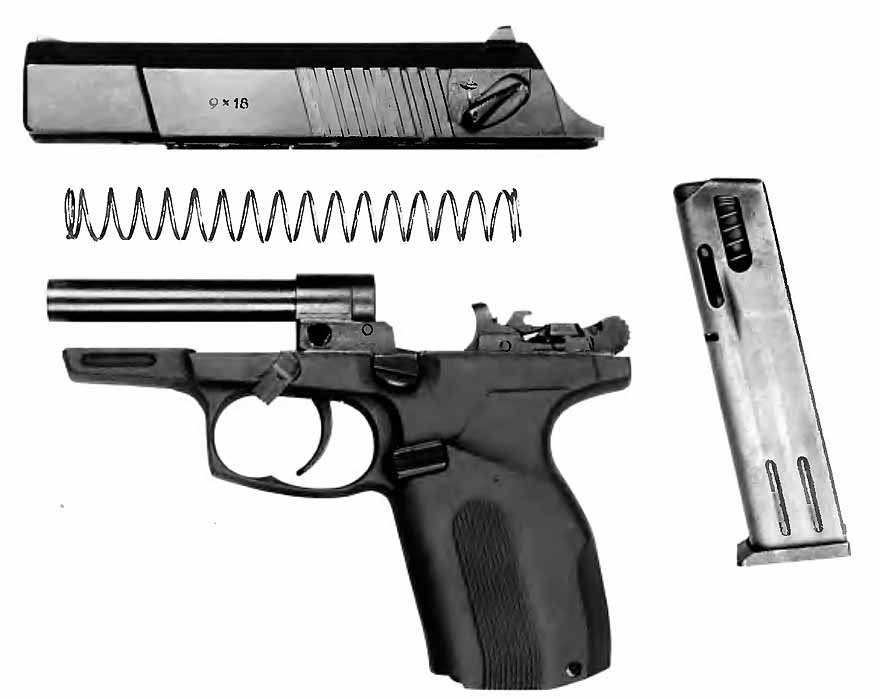