Later on the system was augmented by the GO-SO fragmentation, the GK-50 shaped-charge, the GV-5Q door-buster the GD-50 instantaneous smoke screen, the BK-50 glass-breaking, and the upgraded GS-50M tear gas grenades.

The RGS-50 is a single-shot grenade launcher with a tip-up smoothbore barrel (similar to that of a. hunting gun). Design and operating features of the grenade launcher include the fact that when the barrel is tipped up, the cocking Sever transfers the force lo the hammer, mounted inside the body- The mainspring compresses, and the hammer is locked in the cocked position. When the trigger is pulled, the force is transferred to the sear, which pivots and disengages from the hammer. The hammer, driven by the mainspring, pivots and stokes the percussion cap, thus, firing a round. Alter striking the cap the hammer, driven by the recoil spring, goes back so that the firing pin may disengage from the cap for the barrel to tip up. At the same time the grenade launcher recoils, compressing the hydraulic recoil buffer.

The detachable hydraulic-spring recoil buffer is integrated with the butt-stock, fitted with a rubber shoulder rest. The recoil buffer enables the grenade launcher to fire 0.4 kg heavy grenades with a muzzle velocity of about 90 m/s. The low muzzle velocity and the barrel design ensure an insignificant report, comparable to a clap.

The simple design of the RGS-50 ensures its high reiabity and easy operation.

In the Date 1990s the RGS-50 was upgraded, and the new version was designated RGS-50M A foiling grip was mounted under the barrel for easier handing of the grenade la incher. The hydraulic-spring recoil buffer was replaced with a spring one and the trigger assembly was imported.

The RGS-50 and the RGS-50M are heavy grenade launchers, employed al distant approaches to the large! (up to 150 m). Neutralising the enemy with special ammunition enables special operators to close in on the target and efficiently use their organic weapons.

For instance, the GSZ-50 flashbang grenade produces a considerable psychophysiological effect on terrorists inside a room and temporarily disrupts body functions. A human target is rendered ineffective by a bright flash of at least 2 MCd and an acoustic load of at least 135 dB. The grenade does not have any mechanical damage elements.

The EG-50 round is most effective against individual human targets. A flexible baton, weighing about 85 g, reliably neutralises an unprotected human being at a range of up to 40 m for a short period of time. At the same time a person is safe even if the baton accidentally hits him or her in the head.
The E6-S0M round with rubber pellets is also designed to temporarily neutralise multiple targets at a range of up to 10 m or unseen targets inside a room. Human targets are rendered ineffective by a combined psychological effect of the report and the flash and the shock effect produced by rubber pellets. The total weight of 56 rubber pellets equals about 140 grams, and the dispersion diameter at a range of five metres amounts lo less than 1.5 m. The EG-50M round can be fired from both the RGS-50 grenade launcher and the US-50 firing device, designed for single-handed firing. The US-50 weighs 1.5 kg, has an effective range of fire of up to ten metres, and features the following dimensions — 406 x 84 x 64 mm.

The GS-50M tear gas grenade, weighing approximately 400 grams, is designed to temporarily neutralise a unit of terrorists or a single criminal inside a room Offenders are neutralised with the help of a tear-gas aerosol (chloroacetophenone, CN), dispersed by the explosion. The high-sensitivity impact fuse reliably detonates the grenade when it hits the target and instantly creates an unbearable concentration of tear gas. The grenade does not have any mechanical damage elements.

The GD-50 smoke grenade is designed to facilitate covert manoeuvres by creating instant smoke screens. The BK-50 round is designed to break plate-glass windows and facilitate access to buildings under attack through windows.

The GS-50PM practice grenade is designed for training of grenade launcher operators in the course of exercises. The practice grenade has the same dimensions, weight, and ballistics as the G3-50M round, it features an inert warhead.

The RGS-50M can also fire fragmentation and shaped-charge grenades to kill enemy manpower and materiel.

For instance, the GO-SO fragmentation grenade is designed to kill enemy manpower at a range of about 100 rn in the open terrain, as well as in open shelters, thin-skin vehicles, or rooms with windows. The fragment footprint is up to seven meters in the radial direction and up to 20 m in the direction of the shot within a field of fire of 20 degrees. The grenade may be fitted with a proximity or an impact fuse.

The GK-50 shaped-charge grenade is designed to partially destroy units and assemblies of various vehicles, forcing them to halt. It is capable of penetrating a 20 mm aluminium plate, and there is no damage effect in the radial direction at a range of more than seven metres.

The RGS-50 (RGS-50M) multi-purpose grenade launcher has proved to be an efficient weapon in service with counter-terrorism units during almost two decades of its operation. 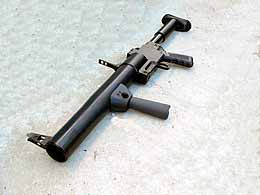 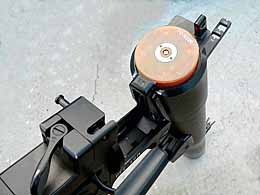 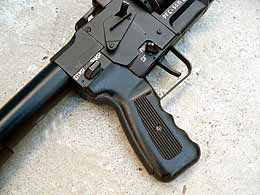 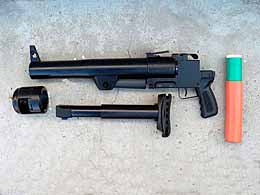