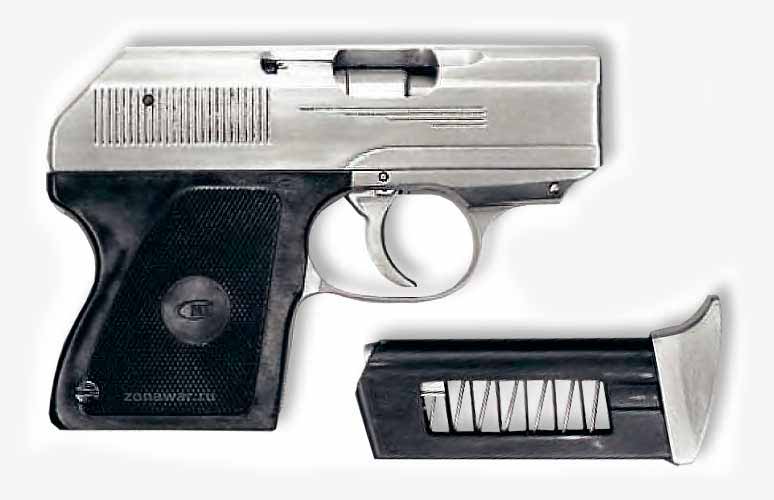 The OTs-21 Malysh developed by Yu.I. Berezin at Tula-based TsKIB SOO is a compact pistol designed to fire the standard 9×18 PM cartridge, which ensures high stopping power lo such a small-size pistol. The pistol is intended for concealed carry or use as a backup weapon, the second-chance weapon’ by special agents.

The pistol operates on the blowback principle. The recoil spring is under the barrel. The pistol has a simple streamlined shape. The internal-hammer trigger assembly is double-action only, so there are no special manual safeties — a considerable pressure on the trigger (about 6 kgf) is itself a guarantee against an accidental discharge.

The sights are a rudimentary groove along the top of the slide. Such sights, which were quite popular in the early XX century, now make a comeback in small-size side arms. Pocket pistols are usually used for snapshots at a range of 7 to 10 m, and such simple sights are quite sufficient at such short ranges. The pistol has no protrusions hindering its rapid withdrawal from a pocket or holster. The open-type cartridge ejector is easy to find by touch , thus it serves as a loaded-chamber indicator. The rear edge of the pistol grip is bent to fit into the palm. The detachable magazine has a capacity of five rounds, intended for short engagements. The plastic magazine floor plate is designed for more comfortable holding and firing. The magazine release button is on the base of the grip.

The bullet dispersion at a range of 10 m is 6 cm.
Like with other pistols, there is the OTs-21 S ‘service’ model chambered for the 9×17 short cartridges. The 5.45 mm OTs-26 Malysh version, designed by L. L. Kulikov, has a magazine with a larger capacity.

The field-stripped OTs-21 breaks into the following five components: the frame with the barrel and the trigger assembly, the slide, the recoil spring, the recoil spring guide, and the magazine. There are several types of holsters, including a ‘business card-holster’ for concealed carry of the OTs-21 pistol.