After the break-up of the Soviet Union the authorities faced the issue of manufacturing all types of weapons and ammunition on the territory of Russia.

Since the Metallist Plant, the major manufacturer of the NSV-12.7 heavy machine gun, remained in Kazakhstan in the early 1990s, a team of designers from the Kovrov-based V. A. Degtyarev Plant, including A. A. Namitulin, N. M. Odibin, Yu. M. Bogdanov and V. I. Zhirokhin, developed a new model of a heavy machine gun (with some components taken from the NSV) to be put into production. The research and development project was codenamed “Kord” (acronym “KORD” stands for “Kovrosvkie Oruzheiniki-Degtyarevtsy” — Kovrov-based Degtyarev Plant firearms designers, although there is also another interpretation of the acronym — “krupnokalibernoe oruzhie degtyarevtsev” — heavy weapon of Degtyarev Plant firearms designers). The plant management decided to start preparing the machine gun for series production as early as 1994 when the development was almost completed. A pilot batch of 12.7 mm machine guns was manufactured in December 1997. On 8 September, 1998 the Russian government issued a decree “On fielding certain types of armament and ammunition with the Russian Armed Forces.” The list of arms included the Kord machine gun. The machine gun, produced since 1998 and officially fielded in 2001, has been combat tested.

The quick-change barrel for the machine gun was developed by Degtyarev Plant designers in compliance with a technology, ensuring even heating up of the barrel and insignificant thermal warping. The service life of the barrel ahs been increased up to 10,000 shots though the use of special grades of steel, production technology, and bore chrome-plating. The barrel is fitted with a highly efficient muzzle brake. The weapon is still gas-operated, but features a revised breech locking mechanism, changed to a rotating bolt with two rows of locking lugs. A new barrel, a revised breech locking mechanism and a reduced recoil have facilitated a 1.5- to 2-fold greater accuracy of fire than that of the NSV machine gun, fired from the same gun mounts. At the same time the Kord machine gun proper weighs just 25.5 kg. 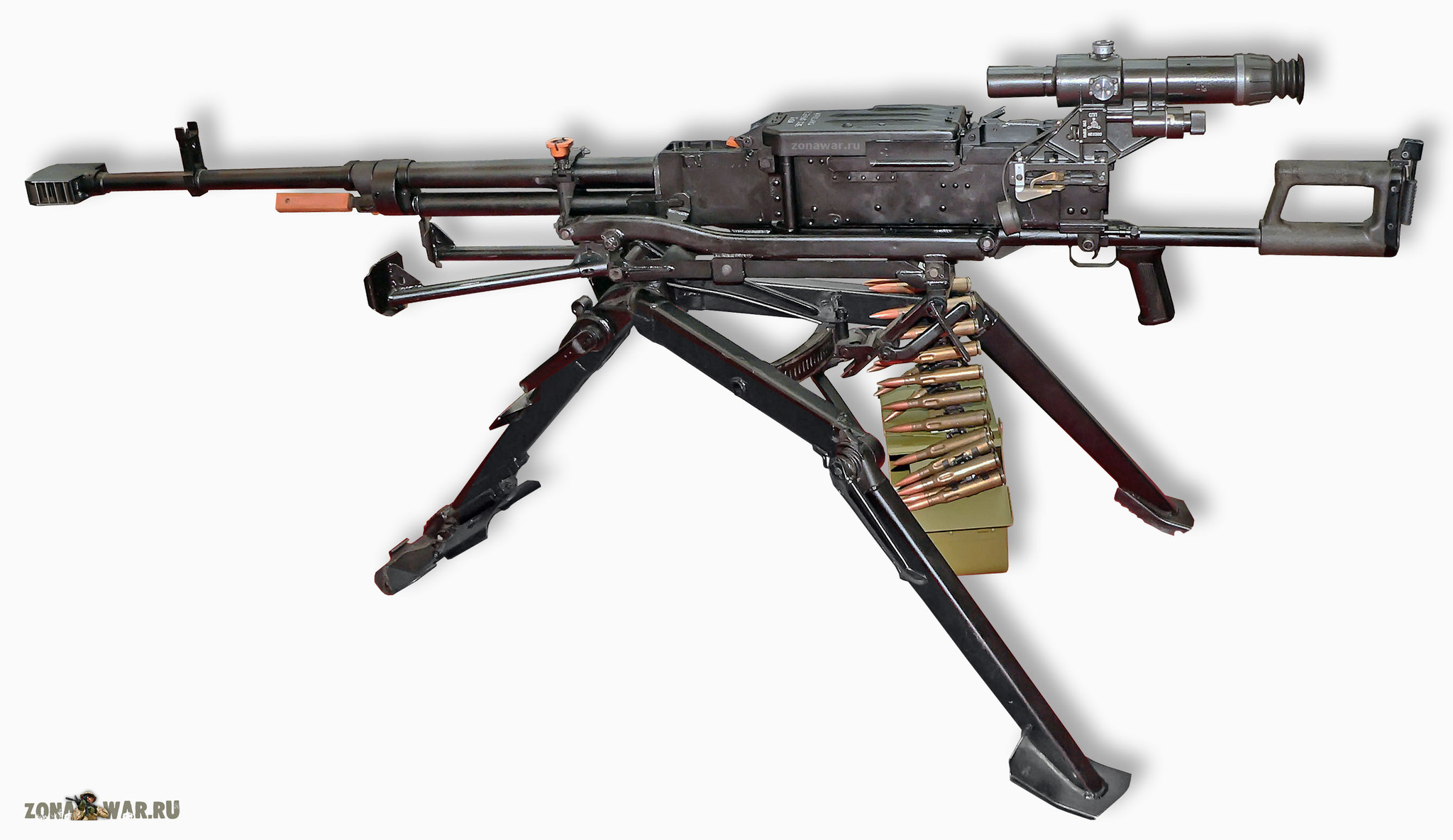 Spent case ejection is either forward or to the right, but the pivoting ejector is mounted on the breech-block carrier assembly. The weapon is fired from the rear sear. It is fitted with a cylindrical spiral mainspring, made of wire cable. The trigger assembly comprises a manual safety, designed to prevent accidental discharges.

When the safety is applied, it is impossible to chamber a round. An ammunition belt can be fed from the left or the right. The machine gun is equipped with open-type irons sights, which comprise a tangent leaf rear sight with a windage knob, graduated from 400 to 2,000 m (every 100 m). It can also be fitted with optical (SPP) night, and collimator sights.

When the machine gun was still under development it was intended from the very outset to use the same ammunition belt as for the NSV and the DShK machine guns, and to mount the Kord on the same mounts as the NSV without any modifications or improvements. The machine gun can be mounted on the 6T7 folding ground tripod, and the 6U6 multipurpose mount, identical to that of the NSV-S-12.7 heavy machine gun.

In addition to that new mounts were developed for the Kord machine gun.

The 6P57 infantry version on the 6T19 bipod weighs 32 kg. The 6T19 folding bipod is fitted with a recoil-buffered butt-stock , similar to that of the 6T7 tripod. The bipod traverse is 15 each side. The Kord machine gun on the 6T19 bipod has a length of 1,980 mm and a height of about 500 mm which allows el to be carried by one man and be set in any position suitable for a general-purpose machine gun on a bipod. The machine gun with a folded bipod can be mounted directly on the 6T7 tripod, and vice versa when removed from the tripod it is instantly ready to fire from the bipod.
The 6P56 variant on the 6U16 mufti-purpose mount (designed to engage ground and air targets) weighs 52-60 kg, while the 6Р59 version, mounted on the 6U16 multi-purpose mounting with SP pedestal mount, weighs 75-80 kg The SP pedestal mount with the swivelling 6U16 mount can be fitted on small-displacement ships, railway platforms, or stationary platforms. The 6U16 mount is a swivelling platform with attachments for an ammunition box (to the right of the machine gun receiver), and a belt link catcher and a case catcher (to the left of the receiver and to the right and in front of the receiver respectively). It can be mounted on transportation vehicles, the BTR-D airborne armoured personnel carrier, etc. The Kord machine gun with a left-hand feed is designated 6P51.

There is also a tank model of the Kord machine gun (index 6P49). It is provided with an electrical solenoid firing mechanism and is mounted on the standard tank mount on the turret of the T-90 main battle tank and the 2S19 Msta-S self-propelled howitzer. The tank-mounted version features a length of 1,625 mm and a weight of 27 kg. Just like the baseline model, it is fed from the right. A variant with a left-hand feed was proposed with only slight modifications necessary, but it was never fielded.

In fact, designers managed to develop the first general-purpose heavy machine gun. Naturally, it does not mean that the Kord can substitute for a standard calibre general-purpose machine gun. However, the versatility of the machine gun significantly boosts its combat capabilities.
There is also an export version of the Kord, chambered for the 0.50 Browning (12.7 x 99) cartridge, used in NATO member-states and other countries.