«Pecheneg» machine gun on bipods with a collimating sight

In the 1980s small arms development focused on increasing the one shot one kill probability. The approach was applied to machine guns as well.
Since the 7.62 mm PKM machine gun was widely used as a light machine gun, when fired from the bipod, it was a must to improve its efficiency without modifying either the cartridge, or the mass-produced design. It would in its turn allow the efficiency of a tripod-mounted machine gun to be increased as well Experts from the TSNIITOCHMASH and the Kovrov Mechanical Plant started tackling this problem.

A team of Tsniitochmash designers, including A. A. Deryagin, N. N. Denisov, V. I. Suslov, M. V. Chugunov, A. S. Neugodov, and others, conducted research and development, aimed at improving the PKM’s accuracy of fire. Their work resulted in a number of measures, aimed at improving the accuracy of fire and extending the service life of the barrel. The new machine gun was named Pecheneg.

It was necessary to eliminate or partially neutralise factors, affecting the accuracy of fire. Such factors included barrel vibrations, the deterioration of ballistics due to the barrel healing up, and the thermal mirage, created by air, heated by the barrel within the sights field of view (the latter effect is especially salient when optical sights are used). The Pecheneg machine gun production technology was mastered at the Kovrov Mechanical Plant. This 7.62 mm machine gun was fielded under the name off «Kalashnikov infantry machine gun», although it also retained the name of «Pecheneg».

The operating principle, the rotating boll locking, the trigger assembly, and the ammunition feed mechanism of the 6P41 Pecheneg machine gun are the same as those of the baseline PKM. Barrel saw the greatest modifications. A different design of the barrel and introduction of barrel jackets increased the rigidity of the barrel, improved its cooling and weather resistance, reduced vibrations, and ensured protection of the line-of-sight against thermal mirages. The gap between the jacket and the external surface of the barrel, lateral ribs, and the ejector near the muzzle (based on the «siphon pope» operating principle due to negative pressure, created by expanding powder gases escaping from the bore) ensure forced even cooling of the entire barrel with outside air.

A fixed carrying handle makes the barrel even more rigid and reduces heat-caused warping during intensive fare. The barrel jacket and the handle protect the sight from a thermal mirage. The bipod, secured just under the muzzle, increased the stability of the machine gun. The Pecheneg, fired from a bipod or a tripod, has a 1.7 to 1.9-fold greater accuracy of fire than the baseline PKM machine gun. A greater service life of the barrel allowed the designers to give up the quick-changing barrel design (it offsets a greater weight of the machine gun, since the crew does not have to carry around a spare barrel), though the Pecheneg still features a quick-release barrel.

About 80% of the Pecheneg components are taken from the PKM machine gun. This fact allowed the new machine gun to be put into production at a relatively low cost at the Kovrov Mechanical Plant in 1999. Later on its manufacture was moved to the V. A. Degtyarev Plant. 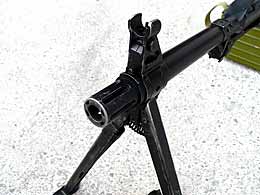 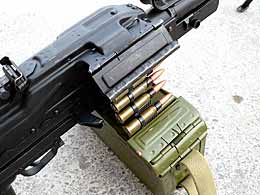 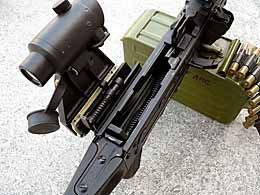 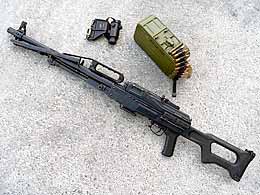