PK machine gun on a bipod

The Soviet Union had repeatedly attempted to develop a general-purpose machine gun, which could be used as a flight, a medium, an anti-aircraft, and with certain modifications a tank machine gun Finally, the Main Artillery Directorate adopted specification requirements for a 7.62 mm general-purpose company- and battalion-level machine gun, chambered for a rifle cartridge, in 1955. The new machine gun was to replace the RP-46 company machine gun, and the SGM medium machine gun. The development project was embarked on by two teams of TsKB-14 designers, including G. I. Nikitin and Yu. M. Sokolov in the first one, and V. I. Silin and V. F. Pererushev in other one, and designer G. S. Garanin of the Kovrov-based OKB-575 design bureau. The Nikitin-Sokolov machine gun, mounted on the Samozhenkov tripod, successfully passed range field tests m 1958. Based on the results of the tests, the Main Artillery Directorate, transformed onto the Main Missiles and Artillery Directorate m 1960, decided to .manufacture a batch of machine guns for service tests and then put the machine gun into production at the Kovrov Mechanical Plant.

When the machine gun, developed by G. I. Nikitin and Yu. M. Sokolov, was almost completed, a team of Izhevsk Mechanical Plant designers, headed by M. T. Kalashnikov, joined the competition. Development of the new machine gun saw participation of V. V. Krupin, V. N. Pushchin, A. D. Kryakushsn, as well as Startsev, Kamzolov, Koryakovtsev, Yuferev, etc. The machine gun was based on the well-proven gas-operated rotary-bolt-Iocked design of the assault rifle. The Kalashnskov and the Nikitin-Sokolov prototypes underwent service tests in the Central Asia, the Odessa, and the Baltic military districts, as well as at the Vystrel officer training courses in late 1960. The Kalashnikov prototype demonstrated the same «family» advantages, inherent in Kalashnikov assault rifles, namely an operational reliability, a production effectiveness, easy manufacture and maintenance. The Main Missiles and Artillery Directorate and the Ministry of the Defence Industry gave their preferences to the Kalashnskov assault rifle. The PK/PKS (Kalashnikov machine gun/Kalashnikov medium machine gun, tradex 6P6) entered the inventory in October 1961. It was put into production at the Kovrov Mechanical Plant. The PK/PKS was supplied with a tripod mount and an ammunition box, earlier envisioned for the Nikitin-Sokoiov machine gun.

The quick-change barrel is slid into to the receiver and attached by a barrel-lock. II has lengthwise ribs to increase rigidity and improve heal removal. The barrel lock also regulates the gap between the breeching face and the breech end of the barrel. There is a folding handle for carrying the machine gun and changing the barrel. The muzzle is equipped with a cone-shaped or a cylindrical slotted flash suppressor.
The machine gun is gas-operated. The gas cylinder is mounted under the barrel and fitted with a gas regulator with three fixed positions. The gas regulator opens corresponding holes to change the amount of expanding powder gases bled off out of the gas cylinder into the atmosphere, thus9 varying the recoil transferred on to the piston.

The PK machine gun features an ammunition belt-feed, with the belt placed in the feedway from the right. The ammunition is fed by metallic non-disintegrating closed-link belts. Given a rimmed national rifle cartridge and closed-Sink belts used for feeding Kalashnikov machine guns, a two-stage feed mechanism with a preliminary extraction of a cartridge from a belt link was preferred to a direct ammunition feed design. The PK machine gun is equipped with a lever-type feed mechanism, mounted on the feed cover and operated by the feed lever, mounted on the right wall of the receiver and wrapping around the bolt carrier with its feed pawl and roller. The feedway is protected by flapping dust covers. There ammunition boxes for 100 and 200-round ammunition belts. When the machine gun is tired from a bipod, the 100-round ammunition box is attached to the underside of the receiver. When the Samozhenkov tripod mount is employed all types of belt boxes are carried and mounted separately. A 100-round belt box has a folding leaf in its cover for feeding the ammunition belt» when the box is attached to the machine gun. The Rakov device is used for loading ammunition belts.

Short and long bursts of a general-purpose machine gun differ from those of an assault rifle or a light machine gun. A short burst includes up to 10 rounds, and a long one comprises up to 30 rounds. The PK machine gun fires the standard 7.62 x 54R rifle cartridge with several types of bullets, including a light steel-cored ball bullet, a enhanced-penetration bullet, a tracer bullet, an armour-piercing incendiary bullet etc.
The machine gun is fitted with an open iron sights, including a vertical leaf rear sight with a windage knob, mounted on the receiver cover, and a cylindrical post foresight, mounted on the muzzle.

The machine gun is made of pressed-metal parts. For instance, the receiver is constructed of riveted and welded stampings with a riveted insert The shelf deflector on the left wall of the receiver is closed by a spring-loaded cover., which only opens when a spend case is ejected. The receiver also mounts a pistol grip and a frame butt with a cut-through for the left hand grip and comfortable carrying on the battlefield. The detachable gas cylinder mounts a folding pressed-metal bipod, with its right spade accommodating links of the knockdown cleaning rod, while other accessories and an oil-solvent container are stored inside butt recesses.

When mounted on the 6T2 mount, designed by E. S. Samozhenkov, the PKS machine gun is attached to the cradle. The cradle is hinged to the plug-in swivel equipped with a rack-and-pinion traversing mechanism, and a rod-and-screw elevation mechanism. The traversing mechanism is fitted with stops to limit the field of fire. For anti-aircraft fire or fire against ground targets from a kneeling position the cradle mounts a collapsible pole with a pivoting bracket. The mount features non-digging-in spades — sliding spades affect the accuracy of fire less than a «jumping» tripod with dug-in spades. There is an extra folding spade on the front leg for slippery and moving ground. Hinged tripod legs allow a gunner to fire the machine gun from a prone, a sitting, or a kneeling position.

The PKN/PKSN «night» version is fitted with a rail on the left side of the receiver for mounting PPN-1, PPN-2, PPN-3, NSPU, and NSPUM passive night sights.

The Kalashnikov PK machine gun is in service with more than a dozen and a half foreign countries. 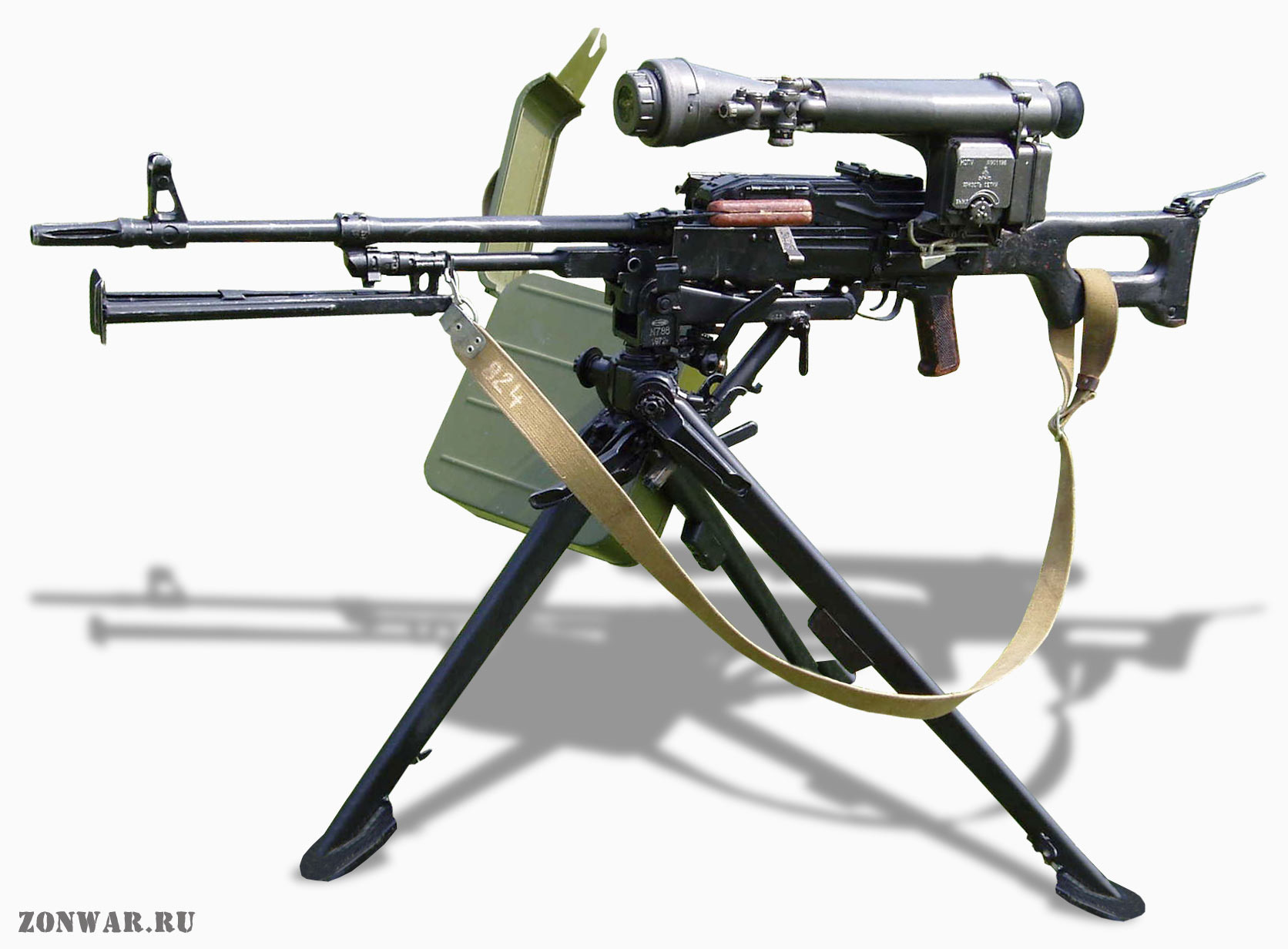