Russian small arms designers started development of a new sniper weapon system (under the project coded “Vzlomshchik” — Burglar) with different calibers: 7.62 mm (Vzlomshchfk — 7.62), 9 mm (Vzlomshchsk — 9), 12.7 mm (Vzlomshchik — 12.7). As a result, in 2003 special operations troops were armed with the 7.62 mm 6S11 sniper system comprising the SV-98 magazine sniper rifle {index 6V10) and 7N14 round with enhanced penetration bullet (although the 7N1 round can also be employed). The rifle as en service, in particular, with units of the Ministry of Interior of the Russian Federation and has been combat proven during ants-terrorist operations in Chechnya.

The SV-98 sniper rifle was designed by the designer V. Sfronsky of Izhevsk Machine-building Plant on the basis of the Record-CISM large-caliber sporting rifle (sports classification). The rifle was developed for the 7.62x54R 7N1 standard sniper cartridge or Extra sports cartridge.

The rifle barrel is manufactured by the foreign-origin method with cold radial forging and subsequent processing by honing (finishing of the processed parts to the required smoothness with abrasive stones) and internal stress relieving. The barrel is attached to the receiver as a free floating cantilever (that is, it does not contact with the stock and other parts of the rifle) and is not loaded with the bipod (so called “free floating barrel8”). This gives stability to its vibrations which can be taken into account during fire for adjustment. To improve accuracy of fire the barrel bore is not plated with chromium. The muzzle part of the barrel is threaded to mount a noiseless and flash less firing device (PBS), a low noise fining device (RMS) or a flash suppressor. If the above devices are not mounted, the threading is covered by the bushing which attenuates vibrations in the muzzle part of the barrel and improves accuracy of fire owing to its weight and some strain it builds up there. The magazine layout of the rifle helped to eliminate impulse loads characteristic of automatic (self-loading) weapons. In addition, the magazine rifle Operates without impact sounds of the action components and allows control over the boll motion (to avoid, for example, glittering of ejected cases, or more smoothly to chamber a cartridge). The sliding longitudinally rotating bolt has three locking lugs on the front and a reloading Sever deflected downwards. The forward bull end of the middle locking lug acts as a cartridge rammer when reloading. In the locked position the reloading Sever stays over the trigger guard to the right making its use by sniper easier. The extractor with spring is assembled inside the bolt and the ejector is located in the receiver.

Rounds are fed from a medium detachable 10-round two-column box magazine. The magazine body is cast from glass-nylon composite reinforced with metal inserts, and provided with a feed lever mechanism. When the magazine is inserted, its correct position is ensured by a special vertical rod pressed in the receiver. When the magazine is attached, the catch mounted on the rod is coupled with a hardened metal bush fitted in the hole on the magazine body to press tightly the magazine against the receiver. This provides simple, stable and reliable magazine fastening to the rifle.
The optical sight mount is fitted on a stepped-up Picatinny-type plate located on top the receiver. Main sighting device is the 3-10×42 type 1P69 pancreatic sight (Giperon). The site provides automatic setting of aiming angles at ranges from 100 m to 1.000 m. The sight field of view is 7.6o for the magnification factor 3xs and 2.5o — for 10x. The sight is provided with rubber eye guard, blind, and lens cap, as well as aiming grid illumination unit. There are also open-type mechanical sighting devices including front sight with the stopper (the front sigh! is adjusted in both horizontal and vertical planes when firing for adjustment) and a variable sight for firing at ranges from 100 m to 600 m. According to the manufacturer, deviation of hits scored in a series of 10 shots at a range of 300 m falls within 50-70 mm. Thus, this rifle demonstrates a 1.5-2 limes better accuracy of fire than the SVD, staying within the limits of 0.6-0.7 minute of angle, which meets current requirements for sniper rifles. The declared effective range of fire is 800 m.

The stock is made from a laminated plywood board. The stock can be adjusted in length (within 20 mm limit) and cheek piece (rest comb under cheek) with butt heel — in height (+/ — 30 mm) and sidewise (+/ — 7 mm). A cutout in the stock is designed to allow sniper hold if, with left hand when shooting. The bipod adjustable in height is mounted in from of the forearm on the longitudinal rod its legs are stowed into the forearm in the marching position. Adjustable back support is fastened to the stock. The stock is provided with the carrying handle to prevent sniper from carrying the rifle by grasping the sight. A variant with plastic stock was also offered.

A wide band can be fastened over the barrel to protect the sight’s field of view from heat waves (mirages), and a special hood over the low noise firing device. The low-noise firing device not only decreases acoustic pressure and eliminates shot flash but functions as a muzzle brake by reducing recoil impulse affecting the shooter.

The new 7N14 sniper cartridge of the 7.62x54R type is a derivative of the 7N1 cartridge featuring enhanced penetration bullet with hardened sharp-pointed core, and surpasses the 7N1 primarily in the capability of engaging targets wearing individual protective armour.
Provisions are made for variants firing rounds 7.62×51 (.308 Winchester) and.338 Lapua Magnum, in that case the rifle is fitted with the stepped Weaver rail (Picatinny rail) mounted on top the receiver. 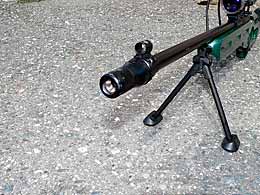 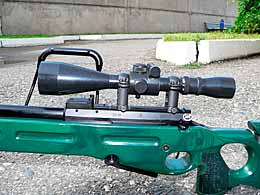 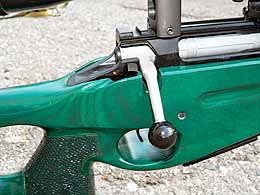 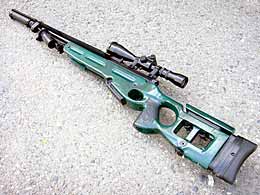