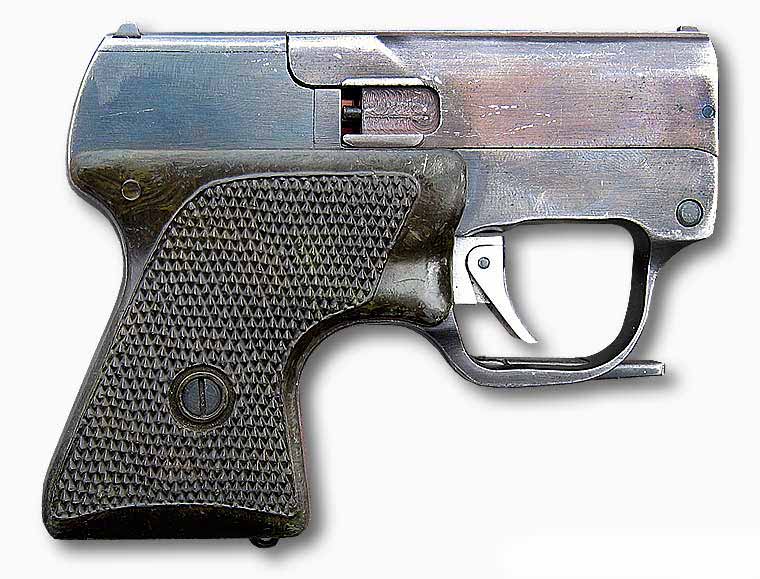 Among the unique silent weapon models developed in the USSR on the basis of the ‘captive-piston’ concept were the MSP and the PSS pistols devised under the supervision of R. D. Khlynin at Tula Arms Plant in cooperation with TsnriTochMash. In such weapons the expanding powder gases driving the bullet forward at the required muzzle velocity are captured inside the cartridge case. The muffling efficiency of a “captive-piston” shot is considerably higher than that of an expansion silencer, since powder gases do not escape at all and the muzzle velocity is far below the sonic velocity. The muzzle flash and report are suppressed without using cumbersome muzzle-mounted expansion suppressors, which results in a very compact pistol. The USSR turned out to be almost the only country to put weapons of such a unique design into batch production.

In the early 1960s, a new 7.62 mm special cartridge was developed, in which a blunt-nosed bullet with long butt was replaced with the standard 7.62 mm Mod 1943 assault rifle bullet. The new round, developed by TsmiTochMash designers B. V. Semin and E. T. Rozanov, was designated SP-3. In order to ensure sufficient acceleration of the bullet along the entire bore, the cartridge has a telescoping pair of pistons, one inside the other. The tapered bottleneck design of the cartridge case restrains and keeps the piston inside the case, thus cutting off the powder gases. The case walls are designed to withstand the high pressure of powder gases held back inside the case. The bullet is capable of penetrating а 2 mm thick steel plate at a range of 25 m.

The MSP non-automatic pistol and the SP-3 cartridge entered the inventory in 1972. They were designed for special operation forces of the Soviet Ministry of Defense and the Soviet Stale Security Committee.

The MSP pistol is a non-automatic double-barrelled over/under Derringer type weapon with tip-up barrens and a separate hammer for each barrel. The barrel cluster is locked by a special projecting lug on the left side of the frame.

The projecting tug is in turn fixed in the rear position by a latch, thus ensuring reliable locking of the bore.

The pistol has no moving parts, preventing any mechanical noises when the pistol is fired. At the same time, it will be observed that a long spent case of the SP-3 cartridge with the protruding piston made it next to impossible to develop an automatic pistol chambered lo this cartridge. The pistol is loaded using a special two-round clip. When the barrel cluster is tipped up, the extracting pin runs around the cam mounted at the front and moves back, snapping out the clip with cases, which makes reloading easier and faster; spent cases are not extracted. 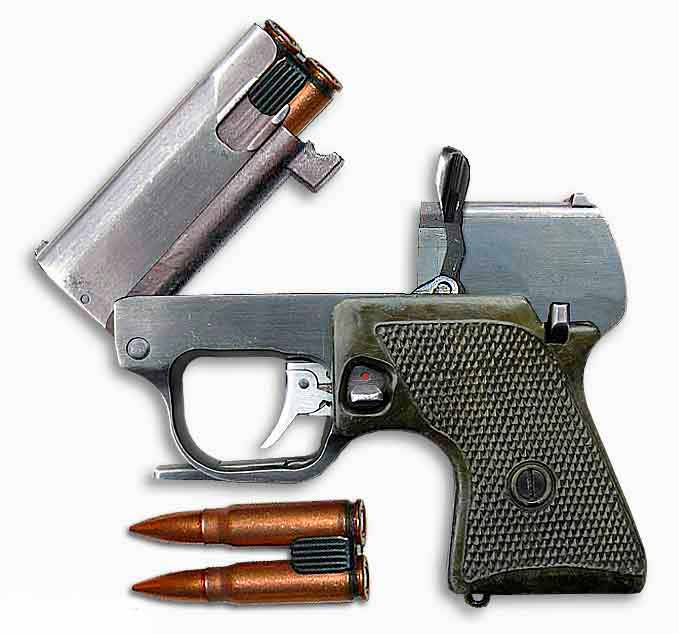 The trigger assembly with two hammers and cylindrical spiral hammer springs is mounted inside the pistol grip. It has several safeties: a manual safety lever; a barrel cluster lifter, which automatically locks the trigger if the barrels are not locked completely; hammer half-cocks; and an inertial trigger safety represented by a heavy plunger. The plunger inertia prevents accidental discharges if the pistol is dropped or jerked. The safety lever is set into the left grip panel behind the trigger guard. Hammers are cocked by a separate lever located near the trigger guard and must be pulled down with the middle linger of the firing hand to cock the gun. When the hammer is cocked in advance, the accuracy of fire is higher than that of a self-cocking shot.

The pistol is fitted with fixed iron sights.

The MSP is a compact concealed carry pistol. It is manufactured by the Tula Arms Plant. The SP-3 cartridge is also used in the firing device of the NRS special scout knife.