In 1991 (before the break-up of the USSR), under the Grach R&D project, Soviet military experts specified the requirements for a totally new cartridge and combat pistol that would be superior to pistols in service with developed foreign states. The Klimovsk-based TsniiTochMash Institute embarked on developing a new 9 mm pistol cartridge first. The new round was expected to be fired by the new self-loading pistol and an advanced compact submachine gun. The ballistic analysis suggested that the bullet of the new enhanced-power cartridge was to weigh six to seven grams and have a muzzle velocity of 400 to 450 m/s.

By as early as the fall of 1991, A. B. Yuriev and E. S. Kornilova had developed the RG052 cartridge under supervision of I. P. Kasyanov. Lead designer P. f. Serdyukov with the assistance of senior engineer I. V. Beiyaev developed a self-loading pistol designed to fire the new cartridge and designated 6P35. A similar pistol was developed also to fire 7.62×25 ammunition. After the first phase of tests it was decided to continue developing the pistol chambered for the 9×21 round with heat-strengthened-core bullet. In the course of the research and development designers decided to extend the initial effective range of fire from 50 m to 100 m, while for the advanced combat submachine gun chambered for the same cartridge the effective range of fire was taken as 200 m.

Operational testing of the pistols started in special law-enforcement units in 1993. An improved version of the pistol received designation RG055. An upgraded 9×21 cartridge improved by I. P. Kasyanov was designated RG054. An export version of the RG055 displayed at various arms shows became known as ‘Gyurza’. 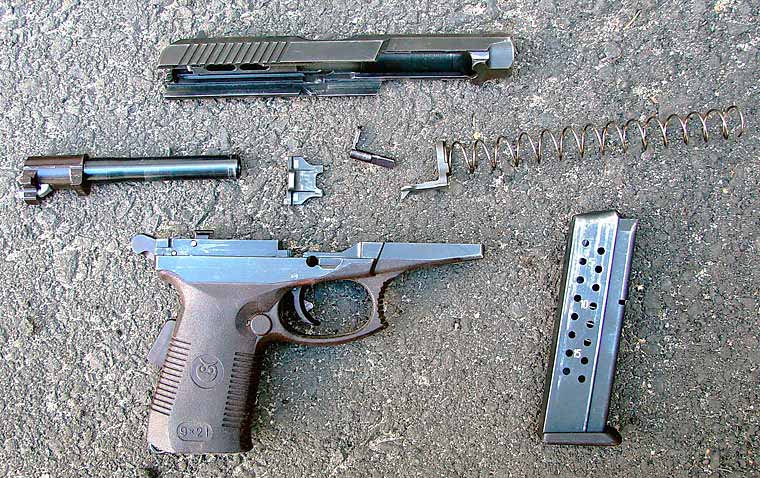 Incomplete disassembly of the SR-1M pistol

In the same 1993 experts of the Russian Ministry of Security (later on the Federal Security Service), who appreciated the combined capabilities of the RG052 cartridge — RG055 pistol system, awarded TsniiTochMash a contract to develop a new pistol system on the basis of the upgraded cartridge (codenamed ‘Vektor’), and a compact submachine gun (‘Veresk’).

In 1996, the updated Serdyukov pistol, designated SR-1 and designed to fire SP-10 cartridges, entered the inventory of the Federal Security Service (‘SR’ stands for ‘spetsialnaya razrabotka’ — special development, and (‘SP5 stands for ‘spetsfalny patron’ — special cartridge). The SR-1 Vektor pistol has an unloaded weight of 0.87 kg, a length of 195 mm, an effective range of fire of 100 m, and a bullet dispersion of SP-10 rounds fired at a range of 50 m of less than 4 cm. The pistol was put into production at TsniiTochMash. In addition to the SP-10 cartridge, designers also developed the SP-11 round with a low-ricochet lead-cored bimetal-jacketed bullet, the SP-12 round with a hollow-point enhanced-stopping-power bullet, and the SP-13 cartridge with an armor-piercing/tracer bullet. The SP-11 was designed by L. S. Dvoryaninova, while the SP-12 and the SP-13 were developed by M. I. Kabaev. 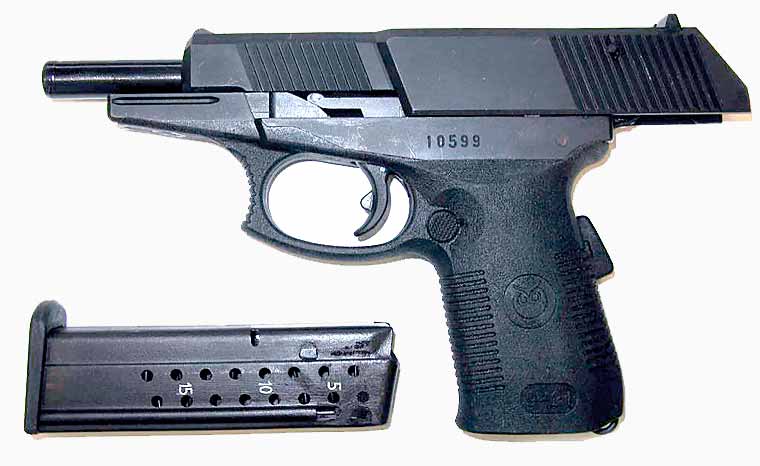 The new pistol system is primarily designed to arm the Special Forces units. It is also in production at TsniiTochMash.

The pistol is a short-recoil-operated weapon. The bore is locked by the slide with the help of a dropping block. A cylindrical spiral recoil spring is would around the barrel, but unlike that of the PM or the APS pistol, it rests against a special recoil spring stop.

The pistol is equipped with a hammer-action trigger and firing mechanism with a cylindrical spiral hammer spring, mounted inside the hammer itself. The firing mechanism enables the pistol to conduct single-action and double-action fire. The firing pin with the spring is mounted inside the slide. The hammer may be half-cocked. A double-action shot is only possible after placing the hammer in the half-cock position. The pistol is fitted with two automatic safeties. The pushbutton grip safety blocks the sear and disengages only after the hand completely claps the grip. The trigger safety lever blocks the trigger and disengages in the beginning of the trigger travel when the shooter’s finger depresses it into the trigger. The automatic safeties facilitate permanent readiness of the pistol, reduce the number of operations to be performed by the shooter to fire the first shot and rule out the possibility of an attempt to fire the pistol with its safety on a blunder like that could cost life in close combat. 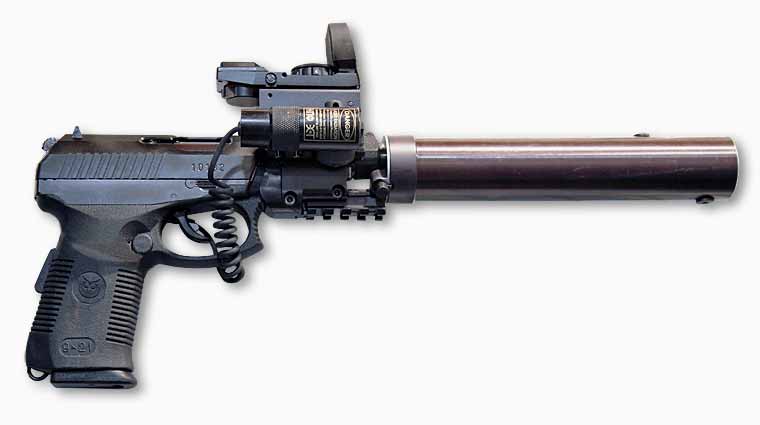 The frame is made largely of plastic. A protruding front of the trigger guard is designed to allow two-handed firing. The non-adjustable iron sights are made of antiglare materials and fitted with white inserts to facilitate aimed low-light fire (in twilight, tunnels, dark rooms, etc.).

The pistol is fed from a detachable double-column box-type 18-cartridge magazine. The magazine release button is located in a frame recess behind the trigger guard and protected against accidental pressing. When the magazine is empty, the magazine follower tooth elevates the slide stop and ihe slide remains to the rear, in order to speed up reloading the follower spring pushes the magazine out wnen the magazine release button is depressed, while the slide stop automatically disengages when a loaded magazine is inserted- Thus» the pistol design includes every measure to combine the pistol’s prompt readiness for action and a quick first shot with convenient aimed fire. The recoil spring stop and the barrel latch of the SR-1, SR-1M and SPS pistols are totally new patented designs.

SR-1 and SPS pistols can be carried with the help of various pieces of gear: a camouflaged holster for overt carrying with camouflaged uniforms, a versatile shoulder holster for concealed carrying (vertically or horizontally), or a waist belt. 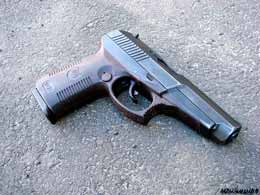 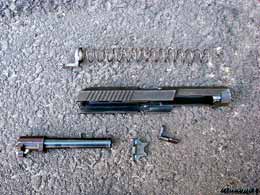 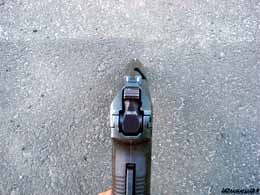 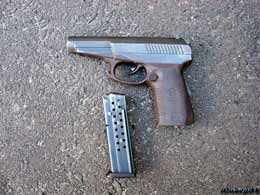 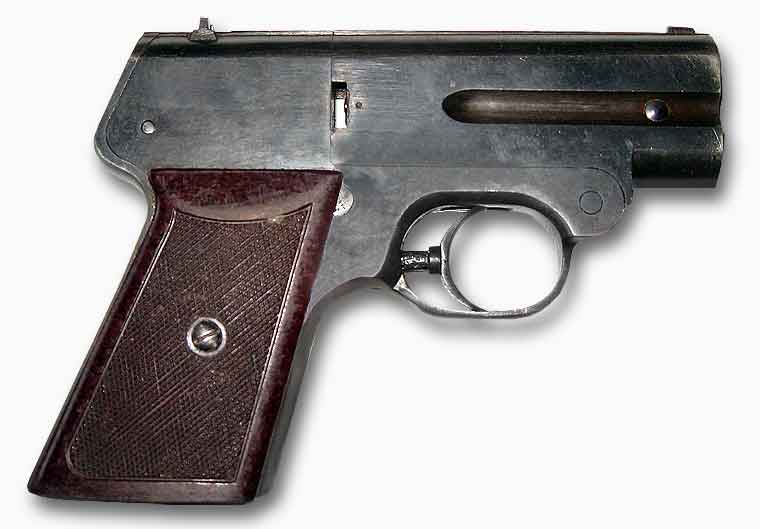