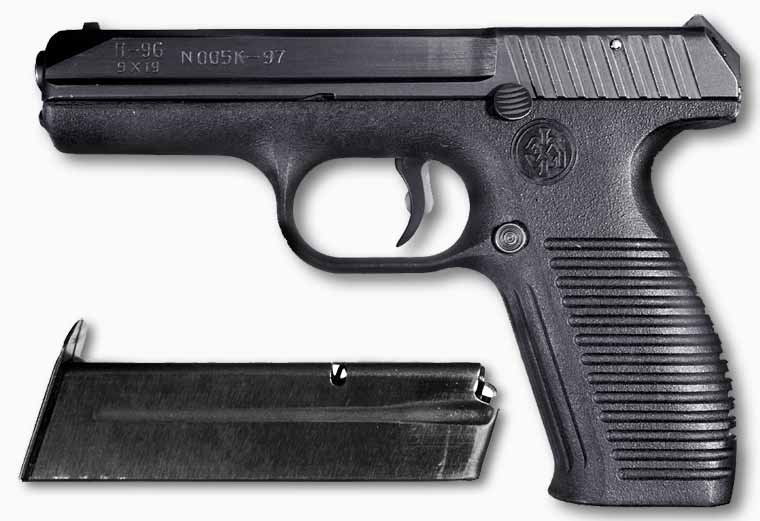 P-96S / P-96M pistols were off-side developments of the bigger, but generally unsuccessful P-96 pistol, designed by the KBP in Tula during mid-nineties. While full-size P-96 was considered as a possible military weapon, its designers also tried to pursuit police and private security markets as well, and simply scaled down the P-96 to create more compact weapons, chambered for 9×18 PM (for Militia / domestic police market) and 9×17 Browning (for private security companies). These versions were designated as P-96M and P-96S, respectively. Despite the fact that neither cartridge was powerful enough to require any form of locked breech, designers retained the rotary barrel, locked breech system of full-size 9×19 prototype. The P-96S pistol is rather unpopular among private security personnel in Russia (which is authorized to carry weapons only in 9×17, and only under strict government regulations), as its ergonomics and reliability are inferior to 9×17 versions of Makarov PM pistol. The only positive sides of P-96S are its light weight and compact size. The “police” version of the same design languished for years, until the very recently, when it was brought back to local law enforcement market. It is yet to be seen if P-96M will prove itself any better than its “civilian” brother. The full size P96 pistol, on the other hand, has been quickly dropped from development, and was subsequently replaced by more successful GSh-18 pistol. 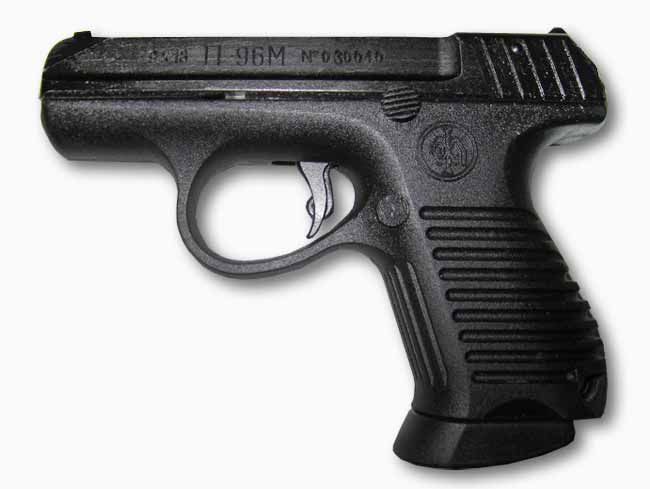 P-96M/P-96S pistol is short recoil operated, locked breech weapon with polymer frame. It uses rotary barrel locking, with single lug at the top of the barrel that engages ejection window in the slide. Trigger is of double action only, striker fired; for each shot, striker is pre-cocked during opening movement of the slide, and then brought to full cock before release by the pull of the trigger. There are no manual safeties, and trigger is fitted with automated trigger safety (of rather uncomfortable shape). Sights are fixed. Magazines are double stack, and hold 15 rounds in “police” and 10 rounds in “private security” versions. P-96S 10-round magazines are flush-fit with grip, while P-96M 15-round magazines are extended and provided with polymer cover/thumb rest at the bottom. Magazine release button is located at the base of the triggerguard. 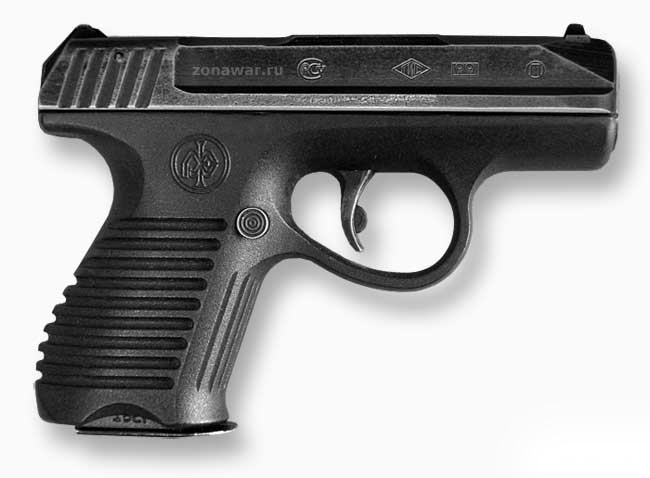