Combat smooth-bore firearms capable of firing with shot, canister, bullet and special rounds (e. g. with tear gas) make up a specific class of close combat weapons used mainly in police and anti-terrorist operations. Traditionally the most reliable hunting-calibre smooth-bore magazine-fed firearms were used, but after some time growing attention was paid to self-loading models. Such self-loading shotguns have also appeared in Russian families of smooth-bore weapons based on the Kalashnikov system. They are also named smoothbore carbines.

In 2003 a family of the Saiga self-loading shotguns and carbines produced by the Izhevsk Machine-building Plant accepted a new member — the 12-gauge Saiga-12 Ver. 030 shotgun. That model was derived from the Saiga-12K commercial model with side-folding stock and pistol grip. The Saiga-12 has a gas-operated mechanism. The breech is locked by a rotating bolt with new dimensions and design to comply with cartridge parameters. The return mechanism carries a sliding shield blocking the reloading handle slot when the safety lock is engaged. The firing mechanism of hammer type allows conducting only semi-automatic (single-shot) fire.

In contrast to the commercial model the Saiga-12 Ver. 030 carbine has no blocking unit of the firing mechanism, i. e. this carbine can conduct fire with its stock both extended and folded. There are some other significant differences too. Thus, an automatic halt of the bolt (bolt stop) is introduced; it can be manually activated and deactivated with the magazine detached.

The front sight base attachment is integrated with the gas chamber. The receiver is provided with a detachable bracket for installation of optical or collimator sight. The hinged receiver cover is provided with the Picatinny rail for mounting an optical or collimator sight even with the folded stock. The Picatinny type rail installed under the gas chamber enables mounting a laser target designator or a tactical flashlight. The carbine is equipped with the plastic folding stock (fitted with recoil-absorbing pad on the butt plate), pistol grip and forearm. Slot-type muzzle sleeve serves as a flash suppressor and enables firing with the barrel propped against an obstacle, e. g. when shooting to destroy door locks. Optional muzzle adapters for firing with propelling and other rounds are also proposed.

Rounds are fed from a detachable box magazine. The magazine chamber mouth is designed to make insertion of the magazine more reliable and allows its changing by touch. The gas drive operates with all types of 12-gauge cartridges.

There were reports about the development of Saiga ammunition for a wide range of tasks, including cartridges with rubber bullets, cartridges with improved penetrating effect and cartridges for gas grenade propelling.

This design became the basis for the 18s5 KS-K self-loading special carbine adopted for service with the Ministry of Interior of the Russian Federation an July 2006. The number 1835 in the carbine designation means that the 12 gauge of smooth-bore shotgun corresponds to the barrel bore diametre of about 18.5 mm. The carbine uses ammunition with both lethal and non-lethal effect. The former class is represented, for instance, by the KSP-P rounds with lead bullet and KSP-BP with armour-piercing bullet, while the latter class — by the KSP RP round with traumatic-action rubber bullet.

The Molot Vyatsko-Polyansky Machine-Building Plant designed a weapon only slightly different from the Izhevsk Saiga modification. Both products were displayed simultaneously at the Interpolitex 2005 exhibition. This is quite understandable as two designs are based on the same system, intended to solve the same tasks and use the same magazines. The Vyatsko-Polyansky Plant designers presented their version of a smooth-bore carbine within th e family of the Vepr self-loading weapon developed on the basis of the RPK light machine gun. 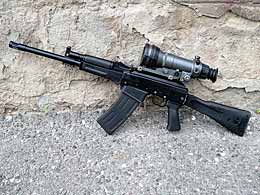 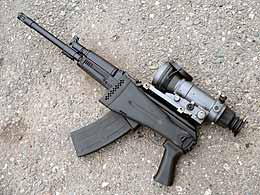 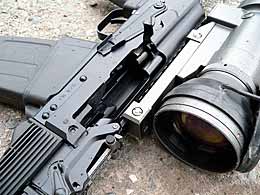 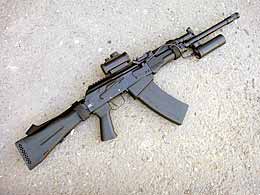 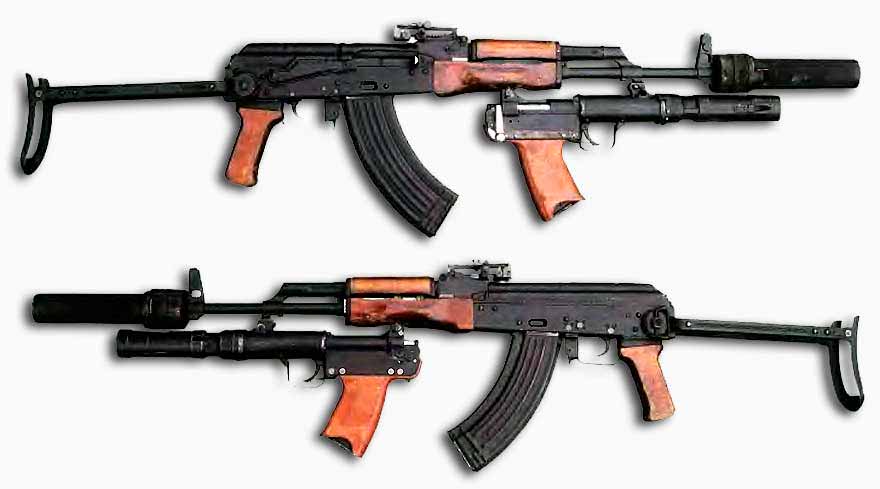