The 6Р13 ARB automatic silent pistol, designed by A. S. Neugodov (TsniiTochMash) abound the Stechkin automatic pistol (see above), entered the inventory in 1972. In the course of the development the pistol was designated AO-44. Like the Stechkin APS, the APB pistol is a blowback-operated weapon with an inertial rate reducer, an external-hammer trigger assembly, a fire selector/safety lever, and a ramp-type rear sight. Its longer barrel is wrapped around by an integrated expansion chamber. Expanding powder gases escape into the chamber through the holes in the bottom of the rifling grooves. The use of the 9×18 PM pistol cartridge combined with partial bleed-off of the gases from the bore ensures that the muzzle velocity is far below the speed of sound. When the bullet leaves the bore, the expanding powder gases return into the bore from the expansion chamber and escape outside through the muzzle, with their temperature and pressure reduced. The muzzle protrudes from the slide and is threaded for attachment of the detachable suppressor. The muzzle suppressor is divided into expansion chambers by four steel partitions with holes. The fact that the integrated expansion chamber literally fits into the contours of the slide became a unique feature Instead of a holster stock used with the APS, the ARB pistol was equipped with a detachable stock made of steel wire. When not in use, the suppressor could be clipped to the skeleton-wire shoulder stock. 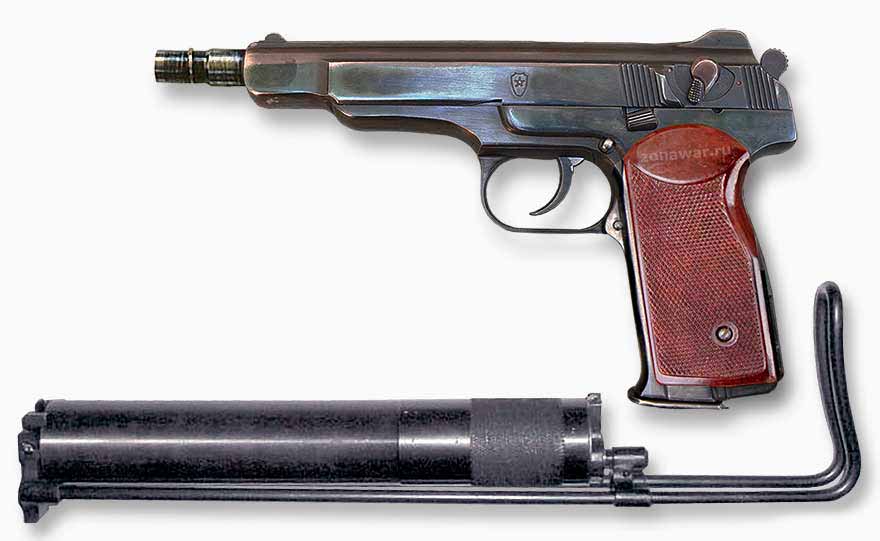 Owing to a larger weight of the pistol in combat position and the center of gravity shifted forward, the accuracy of fire has improved compared to that of the baseline APS model.

The ARB silent pistol was fielded with Special Forces units of the Soviet Army and the Soviet Ministry of Interior. During the war in Afghanistan the ARB pistol was generally used by Special Forces team leaders as an extra weapon. It was also employed by radio operators and heavy gun crews. Special Forces soldiers of the Main Military Intelligence Directorate usually carried the ARB on a sling with its stock and suppressor mounted, or without the stock in the breast pocket of the combat vest.

Cartridges Russia
5.45×39 submachine gun cartridges
846
You may also like