The 1950s — 00s saw rapid growth of the Special Forces. Then Russia developed and fielded a number of special-purpose weapons, including pistols. The so-called silent weapons, boasting a far lower muzzle report, became the most popular type of special-purpose weapons. As is known, an expansion silencer, also known as a flash and noise suppressor or a muzzle suppressor, is the most widespread device for reducing the muzzle report. Multi-chamber expansion silencers are in greatest demand. Such silencers also act as efficient flash suppressors. In addition to muzzle suppressors, there are also so-called integrated silencers. Their operation is based on a combination of a multi-chamber muzzle suppressor and preliminary bleed-off of the expanding powder gases out of the bore. To this end, a number of holes are made in the barrel walls, through which the powder gases following the bullet escape into the expansion chamber.

The 6P9 PB silent pistol, developed by TsniiTochMash designer A. A. Deryagin on the basis of the standard Makarov PM pistol is of a similar design. The PB pistol was adopted under the USSR Defense Minister’s order in July 1967. 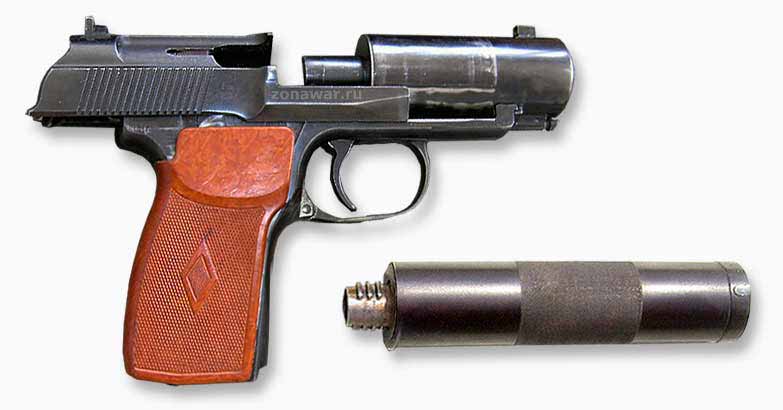 The integrated expansion chamber has made the designers to significantly revise the design of the slide and the recoil mechanism. The slide is shorter and wraps arouzand the barrel only in the lower pan. A spiral recoil spring is mounted vertically inside the grip and engages the slide via a reciprocating lever. The pistol grip is secured on the frame with a button latch. The trigger assembly and the magazine release button are the same as those of the Makarov PM pistol. The foresight and the rear sight are fitted with luminescent inserts for low-light firing.

In addition to army special units, the PB silent pistols were also fielded with special police units and’ the Interior Ministry Forces.

Muffling is quite efficient — a metallic clank of the slide is the only audible sound when a shot is fired. However, at night an indicative mechanical sound is audible at a range of up to 50 m, i. e. within the effective range of fire. Another advantage of the pistol is that it fires the standard mass-produced 9×18 PM cartridge. Given its commonality with the PM pistol, this made the PB silent pistol easy to operate and supply with ammunition. This might have been the reason why the Izhevsk Mechanical Plant continued manufacturing the PB pistol despite the availability of the smaller PSS silent self-loading pistol, chambered for a special cartridge.