This compact weapon system based on the AKSB 74U shortened assault rifle and adopted for service with special operations units of the Soviet Army an the early 1980s, combines not only two types of projectiles (bullet and grenade) but also two basic principles of shot noise reduction through powder gases expansion and their cutoff in the chamber.

The grenade launcher using a gas cutoff scheme is attached to the lower part of the forearm and rifle barrel on special attachment points. Which means that in contrast to conventional underslung grenade launchers (GP-25/GP-30) the noiseless grenade launcher cannot be attached to any standard assault rifle. The grenade launcher fires a 30 mm grenade with shaped charge warhead capable of penetrating about 10 mm thick steel sheet. Because of the specific design of the grenade launcher (a gas-operated cutoff weapon), the grenade has no propellant charge of its own. It is loaded onto the launcher barrel from the muzzle end and pushed out with a piston driven by a special blank propelling cartridge chambered from the breech end (i. e. the grenade launcher has separate loading, both from the muzzle end and from the breech end). The hollow-charge grenade can pierce up to 15 mm thick steel armour plates (up to 10 mm by the Tishina system), while retaining the required beyond-armour effect. The grenade launcher was designed primarily to destroy such targets as fuel reservoirs, parked aircraft, electronic equipment vans, tactical missile launchers, etc. Therefore, the main beyond-armour effect of the grenade is incendiary one. The loaded grenade is retained in the barrel wall by spring-action bends, hired grenade is stabilized in flight by rotation: there are three ready-made lugs on the grenade body which enter into three twist rifling’s in the barrel bore at loading. 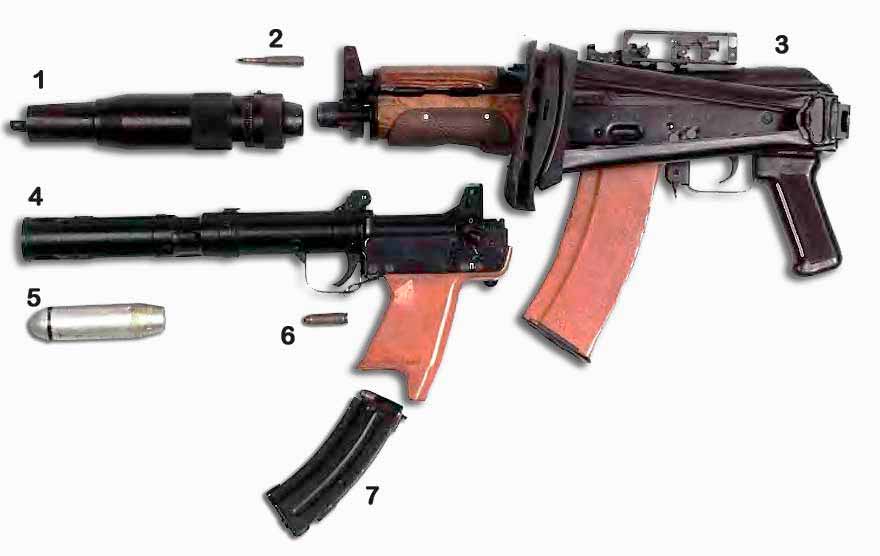 Grenade propelling rounds are loaded into a magazine inserted in the grenade launchers pistol grip: the rounds are chambered from the breech end by a longitudinally sliding rotating rifle-type boll. The grenade launcher has a firing mechanism with a trigger and a non-automatic safety lock.
In contrast to cases of standard blank rounds intended for assault rifles the grenade propelling cartridge case Is not elongated. Its cartridge case neck is swedged inward in a star-like pattern, as it is done in conventional blank rounds. When shot is fired, powder gases of the grenade propelling cartridge press on the piston, the latter ejects the grenade out of the barrel bore and locks away (cuts off) powder gases in the chamber, thus ensuring silent and fleshless shot. Sighting range of the Kanareika grenade launcher system has been increased by 300 to 400 m compared with the Tishina system

To reduce the grenade launcher recoil kick, a recoil-absorbing pad is put on the butt plate.