In the 1970s the Soviet Ministry of Defense and the State Security Committee initiated the development of a special knife fitted with a firearm. Thus the task consisted in turning a scout knife into a combined-effect weapon. This increased the number of silent and flashless arms in scout units.
A knife version with a firearm, chambered for the 7.62 mm SP-3 special cartridge, was developed by a designer team under the supervision of R. D. Khlynin in Tula.

Externally, the 6P25 NRS special scout knife, fielded with the Soviet Armed Forces, resembles the conventional 6P25U NR knife. The knife is used as cold steel to kill the enemy. It is also a working too! — its blade with sesquialter sharpening and a saw on the back edge can cut ropes, cords, demolition cords, saw solid wooden or steel rods, be used as a screwdriver, etc. The insulated scabbard is fitted with a device for cutting wire with a diameter of up to 2.5 mm, telephone cables with a diameter of up to 5 mm, and electric cables with a voltage of up to 380 V.

The firearm is mounted inside a cavity of the knife handle. It comprises a detachable barrel with a muzzle lock and two locking lugs on the barrel, a chamber, a firing mechanism, a cocking lever, a safety lever, and a trigger bar. The muzzle, integrated into the handle butt, is protected by a split-type rubber blind.

To fare the firearm, the knife handle is directed forward, a notch in the knife arrester and a lug on the plastic handle act as a rudimentary sight. Lugs on the other side of the arrester are designed to extract the spent case from the barrel.

When the new 7.62 mm SP-4 special silent cartridge and the PSS self-loading pistol were fielded, designers also developed a new special scout knife, chambered for the new round. The knife with a firearm chambered for the SP-4 round was developed by G. A. Savishcnev, I. P Shedlos, and V. Ya. Ovchinnikov. The NRS-2 special scout knife and its NR-2 version without a firearm entered service in 1986. The scabbard was modified — the wire cutter handle and the joining lace of the scabbard were fitted with holes for crimping primer caps, and the end of the scabbard was equipped with a short blade screwdriver. The blade of the NRS-2 was slightly improved as compared with that of the NRS knife. For instance, a smoother lip ensured belter stabbing through heavy cottonwood quilted clothes, i e. in addition to improving performance characteristics of the knife, designers also upgraded its combat capabilities, based on combat experience.

The firing mechanism, integrated into the Knife handle, has a cocking lever, a manual safety lever, and a trigger bar. A notch in the knife arrester and a metal foresight on the handle head act as a rudimentary sight. Although the effective range of fire is considered to be 25 m, effective fire is possible at considerably shorter ranges.

The NRS knife may be fired from an extended arm, however shooters prefer two-handed firing A ‘captive-piston’ cartridge rules out any muzzie flash or report, as well as burns, caused by expanding powder gases.

A complete set of the NRS-2 equipment includes leather gear for suspending the knife on a belt, and a rubber gear to carry it on a leg. The delivery set also includes: a handle insert (for knife-throwing training without the firearm), a four-cartridge pouch, and a cleaning kill.
The modern army “firing” knife is a special weapon, designed for use in special operations. 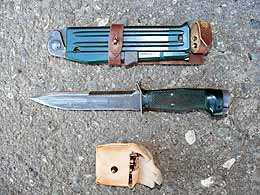 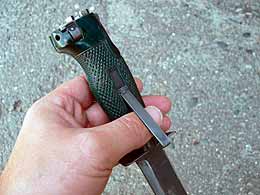 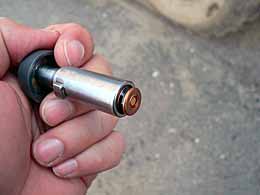 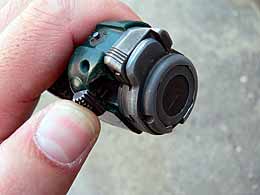