Gunsmiths from Izhevsk Machine-building Plant offered the SV-99 sniper rifle firing the 6.6 mm.22LR type rim fire round to allow sniper to conduct very high-precision fire at small ranges up lo 50-70 m. Employment of very low-power round results in reduced size and weight of the weapon, low impulse recoil and muzzle pressure, minor flash production. Although this soft and naked bullet has enough stopping power, its low penetration capability limits the scope of possible tasks and requires hitting unprotected body areas. Such rifles are applicable, for instance, for operations in settlements where firing is conducted practically over the whole street width. The SV-99 rifle was developed by V. F. Susloparov on the basis of the BI-7-2 (Biathlon-7-2) biathlon rifle and related Sobol hunting carbine (both were manufactured by Izhmash).

The rifle barrel is manufactured by radial cold hammer forging its bore has six twist rifling’s and is not chrome-plated (to improve accuracy of fire). The barrel bore is locked by a straight-pull sliding bolt and a toggle joint, both forming a crank-and-rod locking mechanism. A short swinging back of the bolt allows quick reloading of the weapon by hand. By pulling back the reloading handle situated on the right, the shooter makes the locking lever (toggling in the horizontal plane) to turn and pull the connecting rod after it. As a result, the locking mechanism levers fold to the right and pull back the bolt cocking the hammer of the firing mechanism.

To return the bolt in the front position the shooter pushes forward the reloading lever, and the bolt rams the upper round from the magazine into the chamber. The toggle joint locking mechanism is distinguished by smooth and low-noise operation besides its potential to increase combat rate of fire.

The firing mechanism is of hammer type, with the screw mainspring and separate firing pin assembled in the bolt. The triggering mechanism provides two-stage trigger action. Trigger pull is adjusted within the range from 0.5 to 1.0 kg. The tiring mechanism is assembled in a separate case and is provided with a non-automatic safely lock. Targeting is almost not affected by the action which is characterized by Sow noise.
Rounds are ted from a detachable S-round one-stack box-type magazine. The magazine is flush with the stock. Elevated position of the upper round in the magazine prior to ramming prevents it from catching with its rim. The rifle can be completed with an enhanced-capacity 10-round magazine.

Optical sight is mounted on the dovetail rail on top the receiver. The PO 4×34 or PO 6×42 sight can be mounted.

The stock is made from walnut with the adjustable butt plate and cheek piece both in vertical and horizontal directions (buttstock length is adjustable within 20 mm). The forearm is provided with a metal bar for mounting an adjustable bipod or hand support — such supports are frequent with both sniper and sporting firearms.

The buttstock has a space in its lower part for storing two spare five-round magazines.

Since the rifle was required to be operable in close quarters, the buttstock was designed detachable: it can be replaced with a wooden pistol grip — a solution not frequent among sniper weapons but useful tor special operations.

The SV-99 rifle is completed with a detachable silencer — the 5.6 mm round is well suited for both small-range high-accuracy weapons and noiseless weapons. The silencer reduces shot noise level to that from an air rifle. 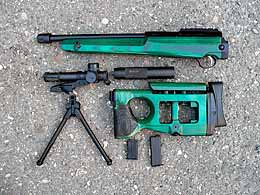 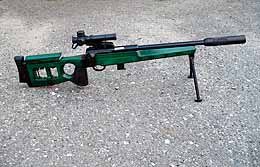 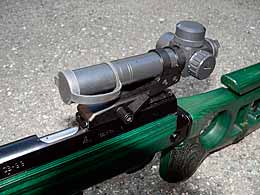 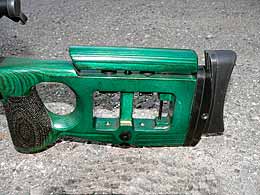