The rifle is a gas-operated action with gas chamber placed above the barrel. The barrel core is locked by a rotating bolt which engages directly with the barrel, thus unloading the receiver. Relatively high recoil energy of the powerful cartridge is partially absorbed by a reactive muzzle brake (powder gasses discharged through it do not create additional load on shooter) and a shock absorbing heel on the wooden butt-stock. The pistol control grip is made from plastic. The reloading handle is located on the right.

Rounds are fed from a standard 5-round box magazine.

Large-calibre rifles developed for powerful cartridge and large aiming ranges have one major problem: that of large size. The V-94 rifle is made collapsible: in the marching position the barrel with the gas tube is folded to the right and backwards and pressed against the receiver. In such position it is easier to carry the rifle as well as stow it in transportation means. The breech and the receiver so folded are covered with hoods to protect them from dirt during transportation.

Various optical and night sights can be employed with this rifle. In particular, the rifle was offered with the PSO-1-1 optical sight with range settings from 100 to 2000 m. The POS 12×50 adequately powerful with 12-power magnification) daytime optical sight was also offered. It is possible to mount the PKN night sight from the 2nd generation night vision devices. An adjustable extendible bipod fastened to a special bar underneath the barrel is used as a weapon support when firing. The bipod hinge allows its turning relative to the rifle in the transversal Diane which facilitates its positioning.
After some upgrading the rifle was adopted for service under the designation OSV-96; it is employed mainly by Internal Troops of the Ministry of Interior and special operations units of the Federal Security Service. 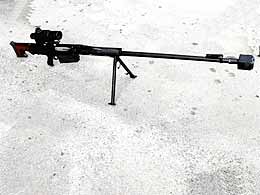 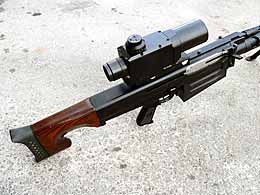 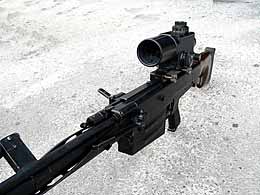 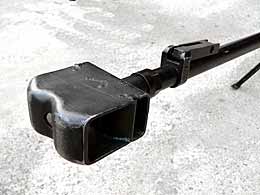