Until early 1960s Soviet Army was armed with the 7.62 mm magazine-type sniper rifle mod. 1891/30. However, new qualitative changes in military affairs and experience gained in local conflicts put a number of new demands on sniper weapons. A new phase of sniper rifle evolution started when ail components were specially developed and manufactured for the unique “weapon-cartridge-sight” system. In 1958 the Main Missile and Artillery Directorate of the Ministry of Defense issued the requirements specification for the development of a 7.62 mm self-loading sniper rifle. Маш competitors were E. F. Dragunov (Izhevsk) and A. S. Konstantinov (Kovrov) joined by S. G. Simonov and M. T. Kalashnikov’s design team who also submitted their prototypes. The SSV-5S rifle prototype submitted by E. F. Dragunov in 1969 was first to meet stringent accuracy requirements put forth by the Ministry of Defense, later appeared the upgraded version — SSV-61. After completion of lengthy comparative tests of Dragunov and Konstantinov prototypes, the 7.62 mm Dragunov sniper rifle (SVD, index 6V1) was adopted for service in 1963.

A 7.62 mm sniper round was developed at N11-61 Research Institute by V. M. Sabelnikov, P. F. Sazonov and V. N. Dvoryaninov. The round was adopted for service later than the rifle itself (in 1967) under the index 7N1 The PSO-1 optical sight was developed by A. I. Ovchinnikov and L. A. Glyzov.

High precision technique for barrel bore processing was developed by 1. A. Samoilov. Reference is often made to the similarity between the SVD and AK rifle systems, namely: gas-operated action with the gas drive using powder gases discharged through the side port in the barrel wall; locking by rotating bolt; bolt of similar shape: preliminary case extraction: hammer firing mechanism with the mainspring of similar shape; dual-action non-automatic safety catch. But differences in the SVD connected with its sniper functions and making St an independent small arms system are much more interesting. The bolt carrier is not united with the gas piston — the gas piston and the pusher are made as separate components, each with its own recoil spring which return forwards after the carrier rebounds rearwards (piston short stroke). The action is presented as a sequence of individual part movements spread in time with smaller total mass of simultaneously moving components. It improves smoothness of action and flattens pulse loads. The gas discharge assembly is provided with gas regulator to adjust action in difficult operational conditions.

The SVD bolt has three symmetric locking lugs providing more reliable locking and decreasing bolt turning angle. The reloading lever is situated on the right side and is an integral part of the bolt carrier. The combination of a relatively massive bolt carrier with the light bolt makes functioning of the locking mechanism reliable. The carrier is machined. A slotted flash suppressor is mounted on the muzzle part of the barrel.

The firing mechanism is assembled in a separate case, and allows conducting fire in the single-shot mode only. II is distinguished for having the trigger used as a sear disconnector with the trigger bar The non-automatic safety lever selector, when activated, blocks the trigger with the bar and closes the slot in the receiver.

The SVD rifles has a sectioned stock. A cut-out in the stock forms with its front edge a pistol grip. The frame-shaped stock allows sniper to hold the rifle with the left hand in supported firing position. A detachable cheek piece is mounted on the stock. The cheek piece and the butt plate are not adjustable. The forearm consists of two symmetrical barrel hand guards with slots intended for improved, also symmetrical cooling of the barrel. The hand guards are fastened to the barrel with spring-loaded fixtures so that the forearm support point is aligned with the barrel axis and the force from the weak hand does not impair accuracy of fire. In addition, when the forearm moves forward as the barrel elongates (because of heating), its mounting conditions remain unchanged and the centre of dispersion is not displaced. The processing techniques evolved with time and wood was replaced with pressed laminated plywood board when manufacturing the stock and with veneer in the hand guards. Later on, the rifle was manufactured with the stock and the forearm made of black-colour glass-nylon composite.

Rounds are fed from a detachable 10-round two-row metal box-type curved magazine. The loaded rifle has its centre of gravity located under the magazine, and rounds consumption affects little the weapon balance and, hence, displacement of the centre of dispersion. Fire is conducted with both the 7N1 sniper cartridges with the SN bullet (made with stricter fabrication tolerances) and rifle rounds such as 57-N-223 rounds with the LPS light conventional bullet, 7T2 with the T-46 tracer bullet, 7BZ with the B-32 armour-piercing/incendiary bullet, and others.

The PSO-1 optical sight (index 1P43) has 4-power magnification, 6-degree field-of-view and us fitted with a rubber eyeshade and retractable sun hood. The aiming reticle includes the main cross arm of the sight intended for ranges up to 1,000 m, additional settings for 1.100/1,200/1.300 m, lateral correction scale, as well as a range-finding scale for a visible target 1.7 m high (medium human height) with up to 50 m accuracy. The reticle is illuminated by a circuit powered from a battery inserted in its body. A special luminescent plate positioned within the field of view of the sight enables it to detect infrared radiation sources.

Ancillary mechanical sighting devices include a ramp-type sight with range settings up lo 1,200 m and an adjustable front sight with lock.
The PSO-1 sight became the basis model for the whole family of optical sights including the PSO-1M2 The PSO-1M2 sight scales are designed for firing at ranges from 100 m to 1,300 m. The sight weight is 0.58 kg. magnification power — 4x. field of view — 6°.

The 1P21 sight (weight — 1.25 kg) was adopted in 1989 (under research and development project coded “Minuta” for pancreatic lens sniper sight). The sight has variable magnification (from 3x to 9x) and field of view from 6°1Г to 2°23\ The grid can be illuminated with brightness control. The sight can be mounted on the SVD rifle, but is not much in use with it.

For close quarters fight the rifle can mount a standard 6Kh4 knife bayonet, although such attachment as a rare thing with sniper rifles and seemingly useless. It is worthy of notice, however, that the SVD rifle was designed as a sniper firearm for small units, which specified its employment in hand-to-hand combat as well.

The SVD design as a whole proved to be a good enough compromise between “sniper” and “general combat” requirements. It must also be noted that the SVD was one of the first army rifles whose design showed vivid “sporting” traits. The SVD rifle demonstrated quite decent accuracy of fire for the 1960s and 1970s. The experience showed that the SVD can engage small-size targets at: a range of up to 800 m. It shows consistent fire results against torso targets (500×500 mm) at a range up to 600 m and head silhouettes (250×300 mm) up to 300 m.

The SVD rifle gained great popularity during combat actions in Afghanistan and Chechnya: its relatively high firepower proved most relevant in mountainous environment. There was virtually no type of combat actions without active participation of snipers.

The SVD sniper rifle with minor modifications is in service with armies of another six countries its variants were manufactured, for example, in Rumania, China, Iraq.

The SVD history illustrates interdependence of sporting, sniper and hunting firearms. Designed with the use of sporting arms experience, the SVD rifle in its turn became the baseline for hunting carbines, such as the Medved [production terminated) and Tigr series made in Izhevsk, and OTs-18 made in Tula.

The SVD sniper rifle reputed as a reliable and powerful weapon does not entirely corresponds to sniper tasks any more as regards fire precision and accuracy, especially at ranges exceeding BOO m. This factor required that the SVD should be complemented with another rifle having much higher accuracy of fire and a sight with increased magnification. 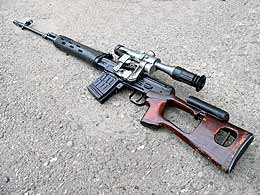 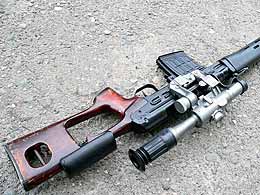 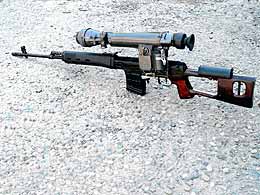 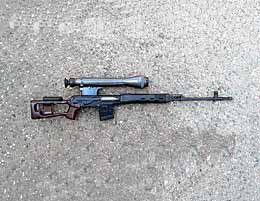