This assault rifle/grenade launcher system was derived by Tula Instrument Design Bureau (KBP) from a radically changed 7.62 mm modification of the A-91 assault rifle, by integrating under barrel grenade launcher into the weapon. The assault rifle has a “bullpup” configuration (with the magazine positioned behind the control grip, and stock elevated to the barrel bore fine). The barrel length is similar to that of the AKM assault rifle; this length was made optimal for given cartridge.
The weapon is gas-operated, with long-stroke gas piston attached to bolt carrier. The breech is locked by bolt rotation.
The KBP designers tried to get rid of traditional drawbacks of the bullpup scheme (which was started in Russia, exactly in Tula). In the A-91M, a used case after extraction from the chamber is deflected by a lever to the right along the breech face and then ejected forward by a deflector mounted on the bolt carrier, through a slot on the right side of the receiver. The enclosed receiver helps to eliminate such flaws of the bullpup layout as powder gases escaping near shooter’s face and the danger of ejected case hitting in his face when shooting from the left shoulder. Dusting danger is also reduced when fire is conducted from prone position on the ground.
The reloading handle mounted on the gas piston rod; it is located under the carrying handle and can be deflected left or right at shooter s convenience.
The firing mechanism enables single-shot and automatic firing. The fire selector is installed on the Sett side of the receiver.
The assault rifle is intended primarily for use in close combat, with prompt bringing of the weapon into ready-to-shoot position, fast targeting, and simple control. The pistol grip and forearm make up a single plastic body rendering the assault rifle more comfortable for handling. Small radius curvature of the magazine case dictated that the control pistol grip should be deflected well forward in order to facilitate the magazine change.
The ramp-type sight with a dioptric sighting point and an adjusting drum is mounted on the carrying handle.
The diopter sight set closer to eye allowed extending sighting line.
A 40 mm muzzle-loading grenade launcher is integrated with the assault rifle forearm. The weapon has two separate triggers: one for the assault rifle and another for the grenade launcher. The grenade launcher sight is mounted on the left side of the casing. Proper relative arrangement of the magazine and grenade launcher improves balance of the bullpup weapon, which is important for unsupported firing. The rubber stock pad is fitted to soften recoil when firing from grenade launcher. 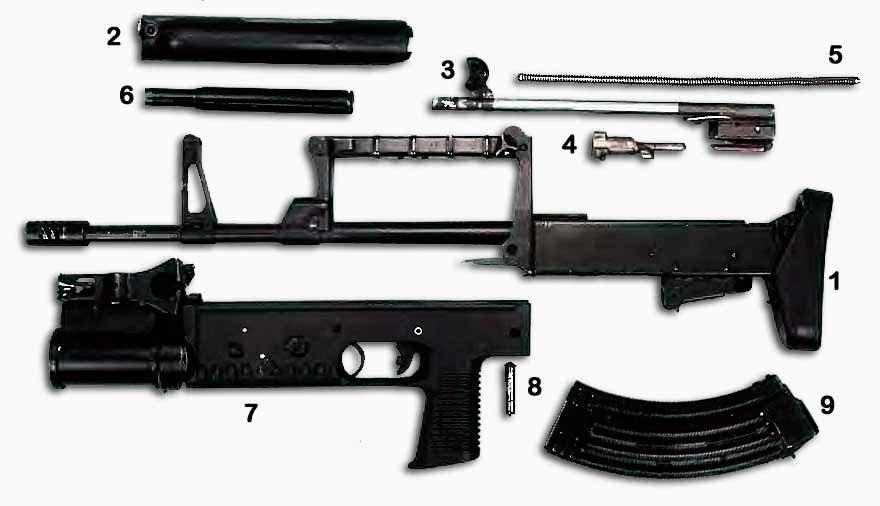 An export modification of the A-91M system firing the 5.56×45 cartridge was developed. The barrel, bolt and magazine (with plastic case) were most modified although some other parts and units were also changed: in particular, gas piston rod and ramp-type sight. The grenade launcher assembly can be replaced with a conventional forearm assembly.