The 9×39 SP5/SP6 type rounds with heavy bullets, subsonic muzzle velocity and tow recoil impulse proved very effective with shortened (compact) assault rifles. They allow developing weapons with weight and dimensions comparable to those of submachine guns but markedly surpassing So them in firepower. The weapon is well adapted for use in confined spaces indoors thanks to reduced Bevel of shot sound pressure and lesser susceptibility of the low-velocity bullet to ricochet. The SP6 special armour-piercing rounds can engage enemy personnel wearing individual protection means (body armour vests) up to the 3rd protection class as per effective GOST standard, at ranges up to 200 m.

Assault rifles for 9×39 rounds designed in the 1990s included a model created in 1994 in the TSNHTOCHMASH by A. D. Borisov, V. N. Levchenko and A. Tyshlykov on the bases of the AS Val noiseless assault rifle. A new ” noisy” assault rifle was given name MA Vikhr and later on — index SR3 (abbreviation “SR” stands for Russian ”spetsialnaya razrabotka” — special development).
The weapon has a gas-operated mechanism with a long-stroke gas piston rigidly connected to the bolt carrier; the breech is locked by a rotating bolt with six Socking lugs. Unlike the baseline model, the SR3 assault rifle has no holes in its barrel for powder gases discharge to the silencer, nor integrated silencer itself.

The barrel is rifled at a variable pitch to provide increased bullet stability and accuracy of fire. The barrel is equipped with a compensator/flash suppressor. A hammerless firing mechanism of the same type as in the AS assault rifle provides firing in single shots or bursts, but its design sustained a number of changes. The safety Sever is made two-sided and can be operated by fingers of the hand grasping the control pistol grip. The fire selector made as a cross button is located behind the trigger.

The assault rifle was fitted with a plastic pistol grip and a plastic forearm with beads preventing the hand from sliding forwards the muzzle. The metal stock with folding shoulder rest folds up and forward to keep the weapon width unchanged For the same reason, instead of bolt handle, checkered grip pieces (sliders) are provided on either side above the forearm.

Open type sights include a front sight and two-position rear flip-up sight on the receiver cover.
Detachable sector-shaped plastic box magazines are borrowed from noiseless predecessors: VSS rifle and AS assault rifle.
Further development of this assault rifle with the purpose to meet emerging requirements of power agencies brought into being an SR3M modification providing greater versatility, since it can be used as a compact assault rifle or an assault rifle with lowered shot sound, with day or night sights.

The bolt carrier of the assault rifle was fitted with a reloading handle. A sleeve on the barrel muzzle enables mounting a detachable PBS device (silencer), since characteristics of the rounds facilitate its application.
The SR3M assault rifle features a left-folding frame-type stock, a new forearm, and a folding front handgrip on the forearm.
The assault rifle can accept both legacy 10/20-round magazines and newer increased capacity 30 rounds magazines. 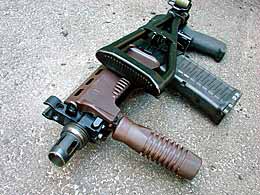 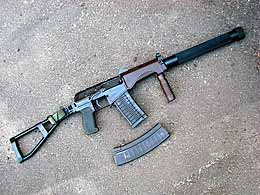 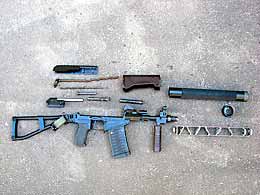 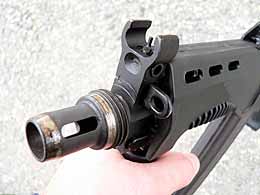