AN 94 assault rifle with unfolded stock

Military experts argue that characteristics of modern close combat have notably changed, and therefore the prerequisite for victory rests with the ability to defeat enemy with a short and accurate burst. This also allows commanders to spare ammunition as well as conduct longer combat without having to distract for ammunition replenishment.

As far back as in 1978 the Main Missile and Artillery Directorate (GRAU) formulated its requirement for the improvement by 15-2 times of an assay a le s fee effectiveness as compared with that of the AK 74 In August 1981. The Commission on Military Industrial issues under the USSR Council of Ministers approved a dedicated research and development project named “Abakan”. Fire effectiveness was to be augmented by obtaining a 5-10-fold increase en accuracy of fire when shooting from unstable positions (on the move, in standing kneeling and unsupported positions).

At the beginning 10 design groups from Tula. Izhevsk Kowrov, Klimovsk submitted 12 project proposals. Prototypes were tested in late 1984. All designs differed but in ponciple there were three schemes of gas-operated mechanisms trial were competing РІР‚вЂќ classical action with gas drive TKB-0111 assault rifle prototype designed by G. A. Korobov and TKB-Q136 by N. M. Afanasyev (both designers from TSKIB SSO Central research and design bureau of sporting and hunting guns, Tula). AFT by I. A. Postnikov (Izhmash);
— with lagged recoil impulse: TKB-0146 by I. Ya. Stechkin (TSKIB SOO). AS by G. N. Nikonov (Izhmash);
— with balanced action: AEK-971 by B. A. Garev, AEK-978 by P. A. Pikinsky {both from Special Design Bureau of Kovrov Mechanical Plant), AKB by V. M. Kalashnikov (Izhmash).

Assault rifles designed by Stechkin, Korobov and Nikonov successfully passed range trials. Main contenders were two prototypes designed by Stechkin and Nikonov “with shifted (delayed) recoil impulse” (meaning time delay of recoil impulse action after the bullet has exited from the barrel bore). An upgraded assault rifle designed, by G. N. Nikonov was manufactured in 1985 under the designation ASM. In 1989 the ASM assault rifle was approved for operational tests completed in 1991. Finally in 1997 the 5.45 mm Nikonov assault rifle mod. 1994, AN 94 for standard 5.45 mm cartridge and standard magazine was adopted for service.

The AN 94 assault rifle (in short AN; index 6P33) is based on gas-operated mechanism and breech locking assembly with rotating bolt, although operation of its systems is unique.

The barrel with gas chamber and gas tube is connected to the receiver in which the bolt carrier with the rotating bolt moves longitudinally. This assembly composes a firing unit mounted in the casing/carriage that reciprocates during shooting (so called “gun carriage” arrangement).
Inside the receiver behind the bolt carrier there is a recoil spring of the bolt group and an additional counter buff speeding up the bolt group rebound. The reloading handle is located on the right. On the left side under the mobile receiver a recoil spring is housed in the casing.

In the fixed-length burst mode, the firing unit assumes the rearmost position after two shots are fired at high rate (1800 rds/min), and the bullets have had time to exit from the barrel while the assault rifle has not yet moved from recoil action. The shooter feels recoil impulse at the end of the burst (hence another term: “system with recoil impulse accumulation”).

Rounds are fed from a standard 30-round box magazine (although a 60-round four-stack box magazine was also designed). The magazine Is attached to the rifle with a tilt to the right (because of the receiver recoil spring position inside the casing) and remains fixed during shooting. This required introduction of a two-stage feed mechanism with intermediate chamber (feed way) and additional rammer linked with the bolt carrier by a flexible steel cable passing through a large pulley on the left side of the receiver. 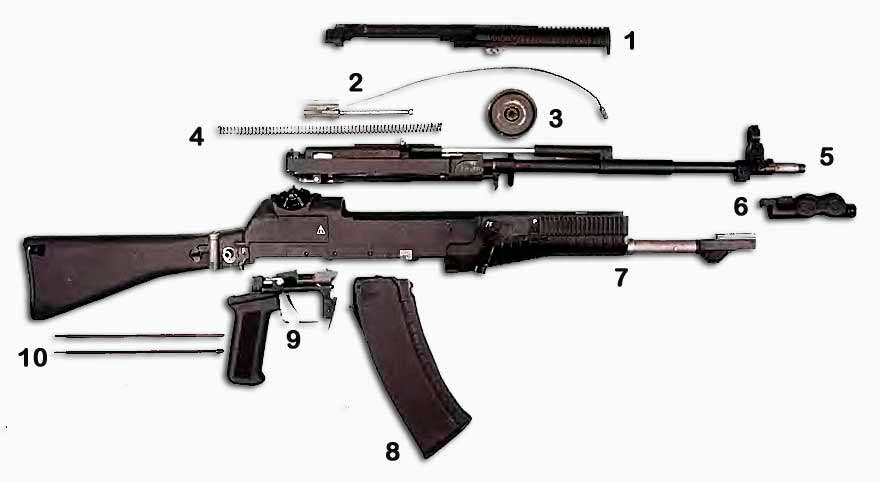 When the bolt carrier goes back, it cocks the hammer which is located in the rear part of the receiver and is connected to the trigger through a system of rods and levers. Alter the second shot the hammer is blocked in the cocked position and the firing unit returns forward, while the next cartridge is already chamber. Р Сћo continue tire, the trigger has to be released and pulled again.

Fire can also be conducted m the single-shot mode and full automatic mode at normal firing rate (600 rds/min) in this case the first two shots are made at high rate, the hammer is retained m the cocked position until the firing unit m completely returned to the forward position the automatic release mechanism releases the hammer, and a third shot is fired After that, the automatic release mechanism is actuated only one time per full cycle of the firing unit travel; in this way the assault rifle automatically “changes over” to normal low-rate fire. The gun-mount configuration, firing unit travel length and counter buff help to avoid hard impact of moving parts against the casing n the rearmost position, thus increasing weapon s stability, it means that higher accuracy of fire is also achieved during full-automatic firing without bust length cutoff. The firing mechanism and the pistol grip are made as a separate assembly unit. The two-position button-operated non-automatic safety lock with wide button is installed within the trigger guard assembly on the left in front of the trigger (position ”P”, the safety blocks the sear and trigger), and fire selector o$ on the left above the trigger. The fire selector has three positions: ”OD” (single). ”2” (fixed-length burst), and “AB” (full-auto).

Sighting devices include front sight with guard on the rack in the muzzle part of the barrel and aperture sight on the rear part of the casing. The sight has five shields with appropriately marked apertures.

The delayed recoil impulse mechanism, large sighting line length, aperture sight, and muzzle brake/flash suppressor are intended to increase target kill probability with the first burst. The rail on the left side of the casing is used for mounting optical, collimator or night sights.

The stock folding to the right, casing, forearm and pistol grip are made from high-impact plastic. The plastic casing makes handling of the assault rifle more comfortable.

Simultaneous works were carried out to improve the 5.45 mm intermediate round, which actually meant the renewal of the entire cartridge/weapon system.

The AN 94 was initially supposed to adopt assault rifle accessories available at that time, such as knife bayonet under barrel grenade launchers, sights, mounts for delivering fire from infantry combat vehicles, armoured personnel carriers, and helicopters. The problem of simultaneous attachment of bayonet and grenade launcher, which was the issue with the AKM and AK 74, has found a simple solution: the bayonet is fixed horizontally on the right. Certainly, the Nikonov is more complex than the Kalashnikov, but that’s natural for transition to new-generation weapons. It is said that sophistication has not affected noticeably operational reliability; the requirements specification stipulated to demonstrate reliability parameters similar to the level of reputable Kalashes.

The assault rifle was to replace AK 74, AKS 74, AKM and AKMS. However, due to a number of reasons, such as acute economic problems of the 1990s and a requirement for thorough troops framing in handling the weapon, actual numbers of the AN 94 assault rifles in service are not great. Izhmash produced ANs in small batches. Further upgrading of the system was greatly affected by untimely death of its creator G. N. Nikonov. Ultimately, the AN was adopted for service only with special operations units of the Ground Forces and the Ministry of Interior staffed with professionals with due account of higher sophistication and production cost of this assault rifle.