Since early 1970s, after selection of an intermediate low-impulse small calibre cartridge for assault-rifles, designers started developing a totally new type of hand-held weapon, namely, a shortened assault rifle. It turned out that specifics of interior ballistics allowed the new cartridge lo propel bullet to the required muzzle velocity even within much shorter barrel while lower recoil impulse promised construction of easily controllable compact close combat weapon handy for actions in confined spaces. In 1973 the Ministry of Defence Industry and Main Missile and Artillery Directorate (GRAU) opened a relevant competitive development project codenamed “Modern”. A number of designers were involved in the new weapon development, including M. T. Kalashnikov, S. G. Simonov, I. Ya. Stechkin, Ye. F. Dragunov. The assault rifle was required not to protrude outside the clear width of a fully packed soldier in the “high port” position.

Works on this weapon were conducted at Izhevsk Machine-building Plant by a group of designers under supervision of S.N. Furman from the design bureau headed by M. T. Kalashnikov. They determined the barrel length that would provide muzzle velocity of 5.45mm bullet as great as that of 7.62mm bullet fired from the AKM assault rifle. The design bureau of M.T. Kalashnikov made its shortened assault rifle prototype from units and parts of the AKS 74 assault rifle then serially produced, which considerably simplified the setting up of production assimilation and maintenance of the new weapon type.

The AKS 74U assault rifle has 206.5 mm shortened barrel providing reduced bullet muzzle velocity of 735 m/s. At the same time, sighting range is reduced at least by half. The barrel shortening required that the gas chamber should be moved rearward and the front sight attachment modified. Lengths of the gas piston rod and the gas tube were reduced accordingly. The shortened barren and increased gas pressure at the muzzle face demanded installation of more powerful flash suppressor with larger chamber for post-combustion of unburned powder particles. The muzzle device also reduces the shot sound effect on the shooter.

After the gas chamber was shifted rearward, cyclic rate of fire rose up to 700 rds/min, but the assault rifle retained good fire control when firing in short bursts. To improve in-flight stability of bullets fired from the shortened barrel, the rifling angle was increased while its length diminished from 200 to 160 mm.

The ramp-type sight was replaced by an L-shaped flip-up one. with settings calibrated for fire at ranges up to 350 m (a point-blank range of fire from this weapon against a full-height target) and from 350 to 500 m. Putting the sight on the receiver cover compensated to some extent for drastic reduction of the sighting line length. The receiver is designed as a flip-up hinged cover. The AKS 74U assault rifle was fitted with a plastic pistol grip and wooden forearm and hand guard; but wooden parts on the AKS 74U, as well as on the AK 74 and AKS 74, later were replaced by plastic ones (made of glass-nylon composite). Plastic parts accounted for some reduction of the rifle weight.

The assault rifle accepts the same plastic-body magazines as in the AK 74 and AKS 74. Smaller-size 20-round plastic magazine is also available.
The AKS 74U was delivered for arming special operations units, tank crews, artillery and missile system crews, and combat support troops, such as signal corps personnel civil engineers, automobile drivers, etc. After the AKS 74U had entered into service, other agencies, including the Ministry of Interior, showed interest in it.

The AKS 74Us main advantage over submachine guns (the AKS 74-LJ is classified abroad exactly with this type because of small dimensions and limited sighting range) consists in the unification of its cartridge with other types of light small arms. On the other hand, assembly units of the AKS 74U shortened assault rifle were extensively used in the Izhevsk-designed 9 mm Bizon-2 submachine gun. while in Tula the AKS 74U served as a base for designing the OTs-14-4 Groza modular assault rifle/grenade launcher system (both for 9 mm and 7.62 mm versions) and a prototype model of the 9 mm OTs-11 Tiss shortened assault rifle.

The AKS 74U assault rifles were also manufactured by Tula Armoury Plant Tula-made assault rifles differed from Izhevsk-made in length of the hand guard and slightly elongated (compared with the Izhevsk items) wings on the sight sides.

Shortening of the barrel caused a marked deterioration of accuracy of fire (the 5.45 mm cartridge was initially designed for a longer barrel), but it was allowed during the shortened assault rifle development. Keeping the AKS 74 left-folding stock (generally more convenient and reliable on the long-barrel assault rifle) in the shortened version makes the weapon too thick in the carrying position. Its pointed 5.45 mm bullet is prone also to ricochet when fired indoors or in the street Therefore in the 1990s other assault rifles firing other rounds were developed for police applications. But until now the AKS 74U assault rifle developed under the defence contract is widely used by Saw enforcement agencies, and has received a number of detachable devices developed to expand its capabilities. 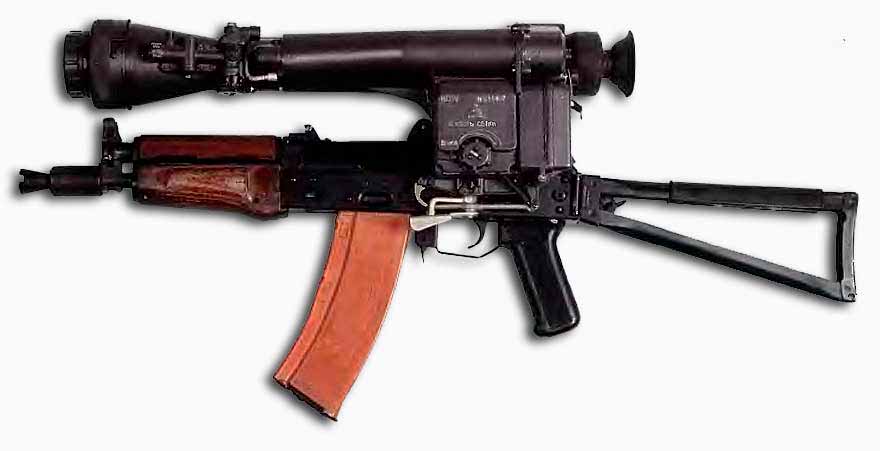 5.45 mm AKSB 74U assault rifle with the AKSB 74U muzzle suppressor 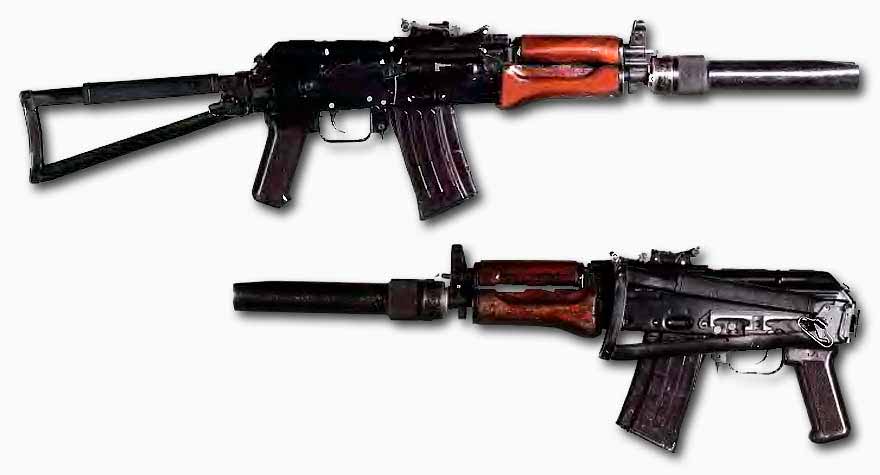 The request for development of silenced modification of the assault rifle for special operations forces was issued after the small arms system for the 5.45×39 cartridge had entered into service. Attempts to solve this task using the AK 74 and AKS 74 designs failed.

With small calibre the relative length of assault rifle barrel increased, and bullets of the US rounds (with reduced muzzle velocity) demonstrated unstable ballistics.

The AKS 74U shortened assault rifle turned out more preferable as a basis for “noiseless” assault rifle. Its modification, known as AKSB 74U (adopted in 1985, almost simultaneously with night modifications of the AKS 74U) mounts the PBS noise/flash suppressor, special sight, pad on the upper arm of the folding metal butt stock and reduced-capacity magazine. The PBS device is a silencer of expansive type. Its principle of action is based on preliminary expansion of the shot powder gases and, as a result, loss of a major part of their energy prior to exiting into the atmosphere, thus the level of shot sound is greatly decreased. The PBS silencer totally eliminates shot flash as well. The US bullet with subsonic muzzle velocity has no ballistic wave, another source of harsh sound. The PBS silencer does not contain a rubber wiper (used, for instance in the PBS-1 device mounted on the 7.62 mm AKM assault rifle). The rifle can fire both US rounds and standard ones. 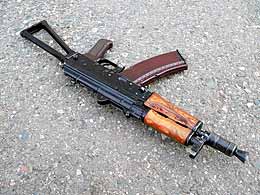 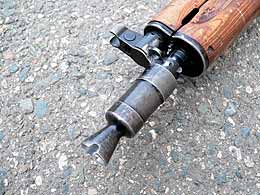 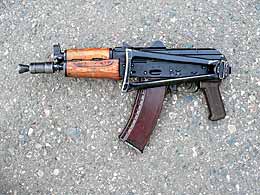 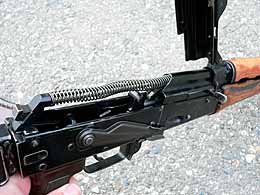