Izhevsk designers embodied their previous prototype design heritage in new modifications of the 100th series Kalashnskovs. For instance, a requirement for improved accuracy of automatic fire stirred a wide interest and further research of the balanced automatics recoil system with gas drive. Such is the system developed by Yu. K. Aleksandrov and V. N. Paranin (several assault rifle prototypes based on the balanced action principle had been designed earlier at Izhmash by Yu. K. Aleksandrov and V. M. Kalashnikov). This system is represented by two assault rifle versions: AK 107 for 5.45×89 cartridge and AK 108 for 5.56×45 cartridge.

The balanced automatics recoil system es intended to use advantages of gas-operated mechanism with a long-stroke gas piston in order to eliminate this system’s inherent bullet dispersion caused by impulses that powder gases generate in the gas chamber and impacts of the moving parts of the mechanism in their extreme positions. Powder gases are discharged into the two-chamber gas cylinder, pressing on two separate counter-moving pistons. Two masses are used to create counter-directed inertia moments in the extreme points, and since their motion is synchronized, the impulse generated in the conventional system by the gas discharging assembly is suppressed. Driven by the return mechanism, both masses simultaneously go to their starting positions, thus the rebound impulse of the moving system is largely suppressed. As a result, the AK 107 burst accuracy of fire when firing from unsteady positions is 1.5-2 times higher than that of the AK 74M. The barrel bore and breech are chrome-lined.

Stroke length of moving elements of the action mechanism is shorter than that of assault rifles of the classical configuration (it is the Kalashnikov system that is recognized as classical), helping to reduce action cycle duration and increase cyclic rate of fire from 600 to 850-900 rds/min. The receiver slot has been reshaped, and attachment of the receiver cover and sight changed. 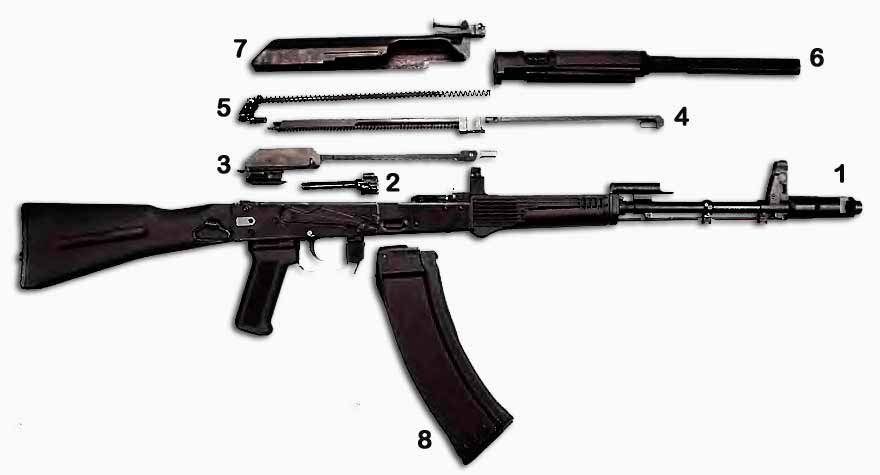 The ramp-type sight is mounted on the cover at its front end and holds it down by locking with a slot on the hand guard. The gas drive casing (gas tube) integrated with the hand guard is placed between the front sight base and the hand guard.

The folding stock, forearm and pistol grip are similar to those on the AK 74M: there is a mounting rail for optical and night sights; under barrel grenade launcher and knife bayonet can also be mounted

A 60-round four-stack box magazine has also been designed.