Machine guns of this calibre had been under development even before the war In fact, the 14.5 x 114 mm cartridge was designed for automatic weapons, and after it had entered the inventory designers attempted to develop a 14.5 anti-tank machine gun, chambered for this round On the other hand, anti-aircraft machine guns had to be improved as well. The Main Artillery Directorate adopted specification requirements for the 14.5 mm machine gun in December 1942. Development of a new machine gun began an Kovrov-based Plant № 2. Several designers, including S. V. Vladsrmirov, decided to base the new machine gun on the 20 mm V-20 aircraft cannon. The 14.5 mm KPV-44 1944-vsntage Vladimirov heavy machine gun and an anti-aircraft machine gun prototype were submitted for service tests right after the end of the Great Patriotic War in May 1945. Based on the results of the service tests, the machine gun underwent further refinement, first and foremost, as far as reliable operation in adverse conditions was concerned.

There was also the KPVB armoured-vehicle variant of the KPV, mounted on open armoured personnel carriers.

The machine gun proper was put into production at the Kovrov-based V. A. Degtyarev Plant (former Plant № 2 renamed in 1949).
The modified KPVT tank machine gun was mounted on heavy tanks (as an antiaircraft or a co-axial machine gun), combat reconnaissance vehicles, and armoured personnel carriers. 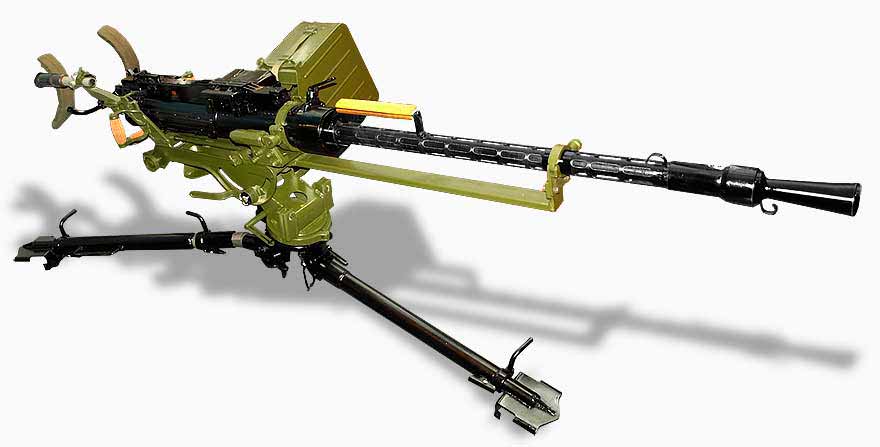 The Vladimirov machine gun is short-recoil-operated. The pressure of expanding powder gases forces the breech block and the barrel rearwards. At the same time the barrel run out spring and the mainspring compress. The muzzle booster, sliding along the receiver cams, rotates the bolt head and unlocks the breech.

The barrel, unlocked from the bolt head, is carried forward by its spring, while the breech block continues its recoil extracting the next round from the feed mechanism and the spent case from the chamber, and drawing the ammunition belt into the gun.

The next round is forced down bolt head recesses by a cam-operated arm, displacing the case of the preceding fired round unto the ejection chute, and is lined up with its cap against the firing pin hole.

When the bolt has reached its rearmost position, energy is stored in the return spring and the buffer. This carries the bolt forward, driving a round into the chamber, locking the breech, and slipping the feed claws over the waiting round in the belt. The firing pin is driven through into the cap, whereupon the round is fired. The sequence is repeated until the trigger is lowered or the ammunition belt is spent.

The receiver is fatted with a back-plate, which also serves as a stop for the cylindrical spiral three-thread mainspring. The receiver back-plate mounts the recoil buffer. The trigger mechanism providers for automatic fire only. The machine gun is fired from the rear sear. It is fitted with automatic safeties, which prevent breech locking and a discharge if the barrel is not properly attached, as well as the belt feed if a cartridge is not extracted from the link.

Ammunition feed is from a non-disintegrating metal open-link belt. The feed slide is mounted in the receiver cover and can be adapted for feed from either the right or the left side. The ambidextrous feed made installation of the KPVT machine gun on interconnected mounts easier. The cocking handle can also be mounted on either side of the receiver with the same end in view.

Advantages of the machine gun include a relatively smooth operation (due to rollers mounted on recoiling parts), a lack of the necessity for fine adjustments of gaps, and a high reliability in various operating conditions.

The Kharykin wheeled mount for the PKP machine gun was based on a light artillery split-trail carriage. The light wheeled tripod mount, designed by K. A. Baryshev, entered service in 1955.

The KPVT tank machine gun was designed to be mounted co-axially with the main gun, as well as on turret, swivelling, and gun ring mounts. Thus, the KPVT was fitted with a detachable feed, a modified receiver, an electric solenoid trigger, and forward spent-case ejection. The machine gun was fitted with a long jacket, covering the entire barrel. All Vladimirov machine guns have been fitted with such jackets since 1956. Ammunition feed was from 50-round ammunition belts. In addition to national T-10 tanks, BTR-60, BTR-70, and BTR-80 APCs, and BRDM-2 reconnaissance armoured vehicles the KPVT was mounted on armoured vehicles of other Warsaw Pact member-slates. The KPVT version has turned out to have the longest life among the entire family of 14.5 mm machine guns. 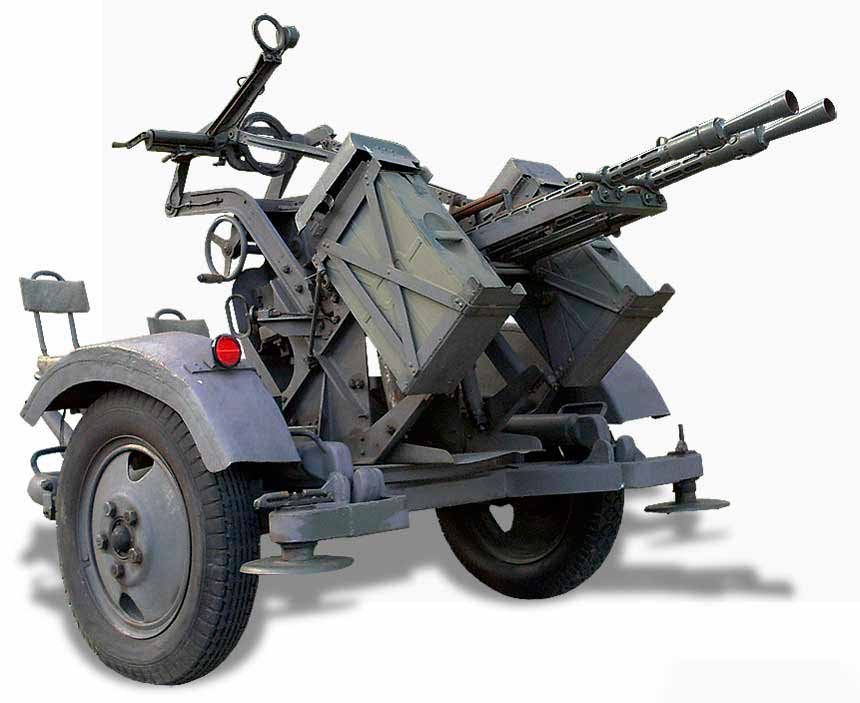