The USSR started toying with and implementing the idea of standardising automatic small arms, chambered for the same cartridge and based on the same system, earlier than other states.

In March 1953 the Small Arms Directorate of the Main Artillery Directorate issued specification requirements to be met by the following standardised automatic weapons: a new Sight assault rifle and a light machine gun. Light assault rifles and Sight machine guns, developed by M. T. Kalashnikov, G. A. Korobov, A. S. Konstantinov, V. V. Degtyarev, and G. S. Garanin, underwent tests in 1956. The new Sight machine gun was expected to replace the 1944-vintage RPD light machine gun, chambered for the very same 1943-vintage assault rifle cartridge, in the inventory of motorized rifle, airborne, and marine squads. In addition to preserving combat capabilities, inherent in the 7.62 mm RPDS intact, the specification requirements also envisioned a considerable reduction in the manufacturing lab our intensity and the weight of the machine gun.

The 6P2 Kalashnrkov RPK Sight machine gun, standardized with the AKM assault rifle, which had been fielded two years before, entered service in 1961. The RPK is an automatic small arm of a motorized rifle squad, designed to kill enemy manpower and weapon systems. When SKS carbines were replaced with the upgraded Kalashnikov assault rifles and the RPD light machine gun was succeeded by the RPK, all automatic weapons in the inventory of squads and platoons turned out to be totally standardized with respect to the cartridge fired and the operating system. The fact that the new light machine gun and the well-mastered AKM assault rifle shared a wide range of standardized units and assemblies, made the RPK easy to manufacture and master (moreover so that the AK as one of the simplest designs to study and master), and ensured its reliability. Easy field-stripping, maintenance, and repair are of paramount importance. The design of the RPK is the same as that of the AKM assault rifle, most of their units and components are interchangeable which ensures good reparability of the weapons in field workshops and at arms depots of military districts. Although, there was a downside of standardizing the assault rifle with the light machine gun for the defence industry — survivability requirements to be met by standardized parts were defined by survivability requirements, facing the light machine gun. The RPK was put into production at the Vyatskse Polyany-based Molot Machine Building Plant.

The main differences between the RPK light machine gun and the baseline assault rifle include a longer heavy barrel a reinforced insert in the breech area, a folding bipod, and a large-capacity organic magazine. The barrel is integrated with the pressed, riveted, and welded receiver. The 590 mm Song barrel, heavier than that of the assault rifle, has increased the effective range of fire up to 800 m, while a larger-capacity magazine has resulted in a more intensive firepower.

The trigger assembly allows the gun to conduct single-shot and automatic fire. The same rotating selector arm acts as a fire selector and a safety. When rotated to «safe», the selector arm covers the trigger extension and prevents trigger movement, blocks the single-shot/automatic sear and conies up to block the groove between the receiver and the receiver cover, thus, blocking the cocking lever integrated with the bolt carrier assembly. The automatic trigger holds the hammer in the cocked position until the bore is locked. A discharge is only possible when the breech is locked, but given the heavy barrel and primarily short-burst fire, it does not increase the risk of a spontaneous shot, caused by a heated-up chamber.

The shape of the butt-stock of the mass-produced RPK Sight machine gun is the same as that of its predecessor the RPD light machine gun. The thin small of the butt allows it to be gripped with the left hand for supported firing. The sights include a protected foresight on a high mount, and a leaf U-notch rear-sight sliding on a ramp, mounted in middle part of the receiver. The light machine gun with a longer and heavier barrel was expected to have a greater range of fire than the assault rifle. However, it took the bullet of the interim cartridge so Song to cover the maximum range of fire, that windage and range adjustments were quite significant. Thus, the rear-sight is equipped with a windage knob. The sights may be fitted with caps fluorescent white spots for night fire. The caps were fielded in 1959. The bipod, mounted well forward, improved the stability of the light machine gun and the accuracy of fire from a support.

The Sight machine gun is fired from the shoulder in an upright or a kneeling position or from the bipod in short bursts (up to five rounds), long bursts (up to 15 rounds), or continuously. 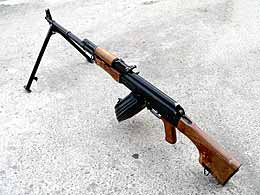 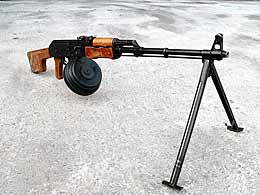 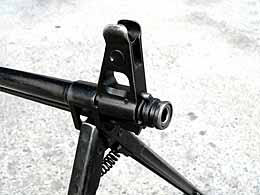 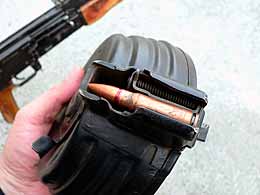