After the AK-74M assault rifle had been developed by the Izhevsk Mechanical Plant and the Vyatskie Polyany-based Molot Machine Building Plant, the standardisation principle demanded that the RPK-74 be upgraded into the RPK-74M (index 6P39). The RPK-74M differs from the RPK-74 in a number of features: She barrel has a longer service life of up to 20000 shots, when firing the new 7N10 round with an enhanced-penetration bullet; the receiver and its cover have been reinforced; the recoil spring guide stop has been modified to prevent the receiver cover from disengaging on impact and under shock. The gun is fitted with a plastic butt, folding to the left and fixed by a lock button in the combat position.

The 45-round plastic curved box magazine is loaded from 15-round clips with the help of a simple device. The magazine, the butt-stock, the fore-end, the handguard, and the pistol grip are made of black anti-glare plastic.

The RPK-74M is a versatile light machine gun, designed to be used by various combat arms (motorised infantry, airborne, marine, and other units) and with various types of sights, attached to the rail mounted on the left side of the receiver.

There are also light machine gun models, chambered for the 7.62 x 39 mm round (RPK-203) and the NATO 5.56 x 45 mm round (RPK-101 and RPK-201 Alfa) Both types of rounds are widespread across the world, though the RPK-203 can also be used by Russian Ministry of Interior units, which still continue operating weapons, chambered for 7.62 x 39 mm rounds. 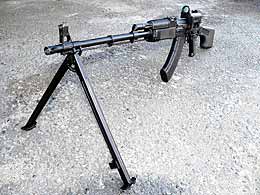 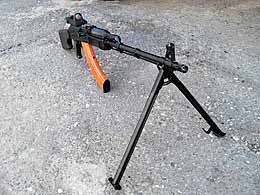 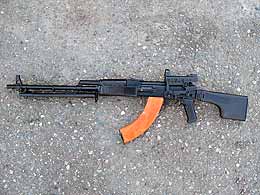 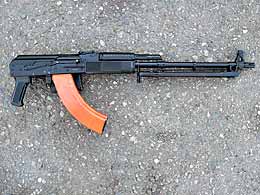