In March 1953, soon after mass supplies of the 7.62 mm AK/AKS assault rifles to the armed forces began, the Small Arms Department of the General Artillery Directorate issued operational requirements for standard automatic weapons: a new assault rifle and a light machine gun. At the outset it stipulated that the basic assault rifle had reduced weight and improved accuracy of fire.

The AKM retained general layout of the AK assault rifle, including gas-operated mechanism with a long-stroke piston attached to the bolt carrier; breech locked by a rotating bolt with two locking lugs; return mechanism arranged in the longitudinal channel of the bolt carrier; fling mechanism allowing automatic and single-shot firing modes provided with the manual fire mode selector/safety lock; arrangement of all systems and mechanisms inside the receiver. It must be noted that from the outset the AK/AKM gas-operated mechanism was decided to have excessive power: coupled with the suspended moving parts and great clearances in the mechanism, such arrangement provides reliable operation of the weapon even in heavily contaminated environment. However, it creates increased load on the system, greater gas cylinder reaction force and vibrations. The AKM design features ports for discharging burned powder gases into the atmosphere moved from the gas tube to the gas chamber.

In contrast to the models which had either a stamped sheet metal receiver with steel insert or a heavy machined receiver, the AKM ultimately adopted a receiver made of stamped parts joined together with welds and rivets. It helped reduce weight and save metal by 80% in production items. The Sight-weight receiver cover was cross-ribbed to increase its stiffness.

A number of steps were taken to improve accuracy of fire: firing mechanism received an anchor-type hammer retarder (proposed by V. F. Lyuty); and the boll carrier impact point was shifted from the right to the left side to increase horizontal stability when firing. Once the trigger is pulled, the hammer turns and strikes twice on the retarder arms, thus increasing the turning time so that at the moment of the next shot the muzzle part of the barrel under vibration takes position close to what it had at the previous shot. Duration of the gas-operated mechanism cycle is increased slightly whereas accuracy of fire is improved.

Some components of the firing mechanism were improved and partially modified, but its general layout remained the same. The fire selector/safety lock in the upper position blocks the trigger and shuts the slot in the receiver, thus preventing the rearward movement of the bolt carrier and protecting the mechanism against dust and dirt (the slot for used cartridge case ejection is closed by the bolt carrier itself). The fire selector/safely Sock in this position makes it impossible to open fire or chamber the round. When in the middle position, the fire selector/safety Sock blocks the semiautomatic fire sear, enabling the full automatic fire mode (the hammer is released from the cocked position by the auto-sear), in the lower position the semi-automatic sear is released enabling the single-shot fire mode. If, for some reason, the hammer fails to cock and rotates after the bolt carrier, the safety lug of the latter will prevent the hammer from striking on the firing pin.

The muzzle end of the barrel is threaded to allow mounting a blank (ire adaptor, a PBS noise/flash suppressor, or a slanted active muzzle compensator.

Powder gases at the muzzle face press on the compensator lug forcing the weapon muzzle deflect downward and to the left, thus reducing burst fire dispersion, especially from unsteady positions. However, single-shot accuracy of fire with compensator tends to deteriorate due to the asymmetric powder gas action on the bullet after if exits from the bore.
The improved accuracy of fire allowed sighting range to be extended up to 1000 m, although in real-life situations fire is delivered within shorter ranges. To conduct fire in the dark, luminous (fluorescent) accessories are attached to the rear and front sights.
The rifle weight was diminished by applying innovative technologies. To decrease the magazine weight an aluminium-based light alloy was used instead of sheet steel. The light-weight magazine body was reinforced by-stamped ribs.
Wooden parts previously made from birch blanks were replaced with parts made from plywood board (buttstock), laminated veneer (handguard) and plastics (pistol grip). St was m the middle of the 1960s when the armed forces started adopting the AKMs with plastic stock (fiberglass), forearm and handguard. The magazine body was also made from plastics.
The sword bayonet was replaced with a universal knife bayonet mod. 1 (index 6Kh3) complete with scabbard with rubber flashing. The universal knife bayonet featured a saw on its back edge and a hole in the blade for coupling with the scabbard (thus transforming the bayonet onto scissors), as well as its handle had plastic on lays. The knife bayonet is mounted to the rifle on grooves and is fixed with the rest ring, and retaining catch.
The AKM assault rifles delivered to the armed forces then replaced both the AK automatic rifles and SKS semi-automatic carbines.
With the adoption into service of the AKM assault rifle and RPK machine gun, the 7.62-mm small arms family formed: it shared main assemblies and parts used for the manufacture of both the assault rifles (24 assemblies, 95 parts) and machine guns (33 assemblies, 163 parts). 10 assembly units and 80 parts of the above mentioned firearms were standardized within this family. Magazines from the RPK machine gun can be used with the AKM assault rifle if needed.
Izhevsk Machine-building Plant was nominated the principal producer of the AKM assault rifles. The AKM production was launched simultaneously with the upgrading of technological processes in order to cut expenses and improve quality. As mass production was mastered, durability of most critical parts continuously enhanced. Areas for automation of many manual and machine operations were identified. It was a period of wide-scale adoption of state-of-the-art technologies, such as parts manufacturing from precision castings on consumable patterns; phosphate and lacquer coating instead of chemical oxidizing; parts manufacturing with powder metallurgy methods; wider use of plastics. Similar to the AK rifles, the AKM barrel bore was shaped by burnishing (passing a movable mandrel through the barrel bore). In the early 1970s radial cold hammer forging was started in barrel production. Thus the weapon evolved with changes introduced into its design, materials and technology, but kept intact its basic configuration. That is why experts pointed out system’s great upgrading potential at the outset of the Kalashnikov automatic rifle mass production.
Owing to its layout perfection, relative simplicity and peculiar elegancy as well as liberally applied principles of parts multi-functionality, design and technological completeness, the weapon demonstrated high operational reliability under any conditions (e. g. burst fire capability even if fouled with sand or soaked sn mud and swamp water). The weapon’s high quality was ensured thanks to the wide-scale and high-level development of metallurgy as well as availability of good quality gun steel Equally important is simplicity of the weapon field stripping and maintenance; in this respect the Kalashnikov assault rifles are perceived as a standard sui generis.
The AKs and AKMs are widely popular all over the world: they are in service with armies of more than 55 countries (mainly in Asia, Africa, the Middle East, and Latin America); and employed by armed forces and police on over 100 countries in the world. In some 15 countries their own variants are produced.
The 7.62 mm M1943 round (7.62×39) was designed by N. M. Yelizarov, Ryazanov. B.V. Syomin and A. Ve. Ryabov. The standard round is” armed with the PS full-jacketed steel core bullet. There are also rounds with tracer, armour-piercing tracer and incendiary bullets, blank and practice shooting rounds. Nowadays the 7.62 mm M1943 round is produced by dozens of companies all over the world thanks to abundance and popularity of the Kalashnikov weapons firing this round.

The AKM assault rifle and its AKMS modification (index 6P4) intended for airborne assault forces and special operation units were adopted for service simultaneously in 1959. In contrast to the AKMS assault rifle has a folding metal stock identical to that used in the AKS. The notion of a compact stock that tolds down and forward was borrowed from the German MP40 submachine gun design. The stock consists of two stamped rods and a foldable shoulder rest a stock locking mechanism is mounted on a pivot stud bushing on its left side in the folded position the shoulder rest is stowed under the forearm and does not insider gripping and thing. The accessory for the AKMS is cairned separately in contrast to the AKM assault the with its tired stock.
The AKMS ballistic characteristics are similar to those of the AKM.
The wooden pistol gnp had a longer use on the AKMS compared with the AKM since plastic gaps were not protected from mechanical impacts when the stock was folded and lineally did not provide sufficient operational strength.
Night modifications of the AKMS assault rifle correspond to tree of the AKM.
— AKMSR with the NSP-2 active night sight, with IR laminator.
— AKMSL, with the NSP-3 passive sight;
— AKMSN with the NSFU passive night sight:
— AKMSN2, with the NSPUM passive night sight;
— AHIMSN3. with the NSPU-3 passive night sight. 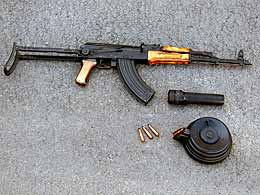 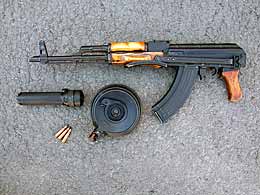 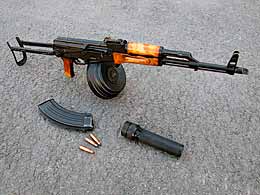 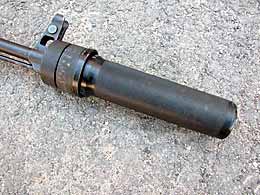