Тhе 12.7 mm 1938-seoes Degtyarev-Shpagin DSHK heavy machine gun, designed by V. A. Degtyarev and fined with the drum rotary-type feed mechanism designed by G. S. Shpagin, entered the inventory matter the decree of the Defence Committee of the USSR Council of Peoples Commissars en 26 February 1939. The mashine gun was mounted on the general-purpose mount designed by L. N. Kolesnikov and boasting removable wheels and a folding tripod. During the Great Patriotic War the DShK machine gun was employed to counter enemy air targets, soft vehicles., and manpower at medium and long ranges, it was also mounted on tanks and self-propelled guns. Designers K. I. Sokolov and A. K. Norov significantly upgraded the heavy machine gun at the end of the Great Patriotic War. First and foremost, the drum feed mechanism was replaced with a shuttle-type one. In addition to that production effectiveness was increased, attachment of the barrel was modified, and a number of measures, aimed at extending the service life of the barrel were taken. The reliability of the machine gun was increased as well. The fast 250 upgraded machine guns were manufactured at a plant in Saratov in February 1945. The machine gun was fielded under the designation of 12.7 mm 1938/46-series DShKM heavy machine gun in 1946. The DShKM also immediately became a tank-mounted anti-aircraft machine gun it was mounted on IS, T-54. T-55, and T-62 tanks BTR-50PA armoured personnel camers upgraded ISU-122 and ISU-152 tank destroyers.

The machine gun is gas-operated. The closed gas cylinder is secured under the barrel and fitted with a gas regulator with three holes. The entire length of the barrel features lateral ribs for better cooling. The muzzle is equipped with a active muzzle brake. The breech is locked by projecting bolt lugs. The DShK barrel was equipped with a active type muzzle brake, later on replaced with an active flat brake (DShK machine guns were also fatted with such muzzle brakes, which were the primary option for lank-mounted models).

The trigger assembly is operated by the mainspring. After locking the breech the bolt carrier assembly continues its forward motion, and the firing pin hits the striker, mounted in the bolt. The sequence of camming out locking lugs and hitting the striker rules out a discharge until the breech is completely locked. In order to prevent the immediate recoil of the bolt carrier assembly after it reaches its extreme forward point there is a delay mechanism, which comprises two springs, a plunger, and a roller. 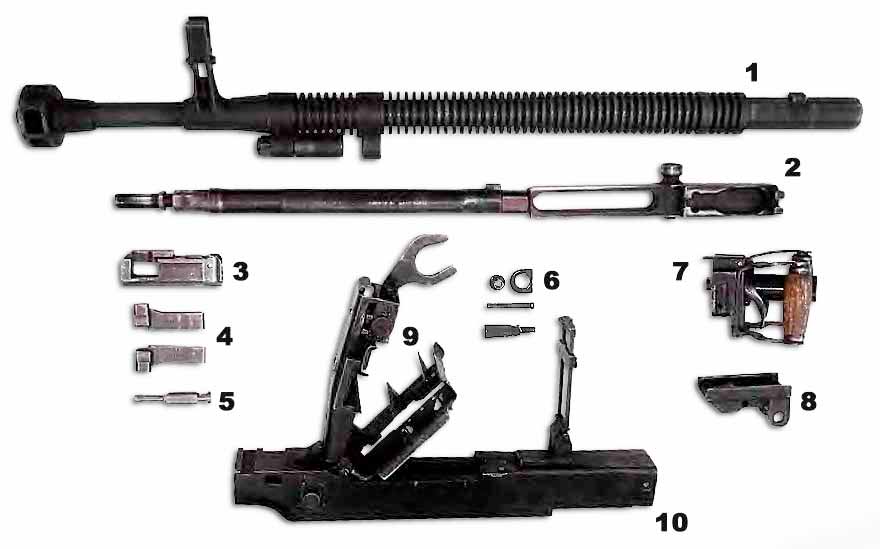 Ammunition feed is from a metal-link belt from the left. The ammunition belt consists of disintegrating open links, placed into a metal belt box, attached to the machine gun mount. The belt box cover acts as a bell feed tray. The DShK drum feed mechanism was operated by the operating stud. The backward movement of the operating stud rotates the feed lever and a pawl bears on a ratchet in the feed drum, causing it to revolve by 60°. At the same time another pawl prevents counter rotation. The drum rotation draws the belt into the gun. A cartridge is removed from a belt link to the left side. On the DShKM machine gun a shuttle-type feed is mounted on top of the receiver The feed slide with pawls is operated by the rotating feed lever, which in its turn is driven by the operating stud just like on the DShK machine gun. The machine gun can readily be adapted for feed from either side, by reversing the feed slide lever.

There are several versions of the 112.7 cartridge: armour-piercing, armour-piercing-incendiary, adjustment-incendiary, observing, tracer, and armour-piercing-incendiary-tracer (used against air targets). The cartridge case is rimless, which allows rounds to be fed directly from the belt.
Ground targets were engaged with the help of a vertical leaf with U backsight mounted on top of the recerver. When the sight is upright the elevating screw is at the top. There is a windage knob at the base of the sight. The sight is graduated for every 100 m up to 3500 m (35 graduation lines). The protected cytndncal post foresight is bolted а high base mounted on the muzzle. When machine gun fired at a ground target deviation at a range of 100 m totalled 200 mm. The DShKM machine gun is equipped with a collimator anti-aircraft sight, which enables the gunner to train the gun on a high-speed target and see the crosshairs as clear as the target. The tank-mounted antiaircraft version of the DShKM was fitted with the K-10T collimator sight. The optical system of the sight generated an image of the target with a projected target reticule for leading fire and azimuth scales.